Back in the spring of 1998, Zak Starkey mentioned an upcoming project with Johnny Marr (ex-Smiths guitarist) that he was excited about getting started on. In January of 2000, it was officially announced that Johnny Marr had finished recording his first solo CD, on which he was handling the lead singing - a new edition to regular duties of guitarist extraordinare! 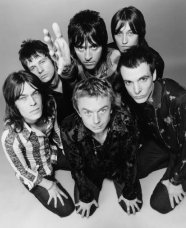 The sound of the record is described by Marr himself as:
"Cross Nirvana, T-Rex and Santana, thats what you get and together with my melodies it gets really weird. ... Its funky, its very melodic rock music with really kick ass rhythms."

About Zak's involvement:
"I met him and didn't know who he was," explains Johnny. "We bonded because we were Bolan freaks. It was only when he said he'd been on the set of Born to Boogie that I thought, 'Oh my God!' " It was Starkey's involvement that triggered the Healers. Marr had spent much of the 90s looking for people to jam with ("drummers who couldn't hold their sticks because they were thinking 'It's Johnny Marr!' "), but he finally found a foil in 1998. The Healers took two years to come together because Marr chose the band "by chemistry... we're all very intense". - from The Guardian (Aug 18 2000)

How he came to sing lead:
"I had this CD of this guy who had a pretty good rock voice," explains Marr. "I played it to the band, and they just reacted very blankly. Eventually they went: 'We only want you to sing. Your voice sounds right." - from The Guardian (Aug 18 2000)

Early articles talked of the CD, to have been produced by Micky P.(Beck, Air), with the hopes of seeing the shops by spring 2000, though he was still shopping labels. The LA-Times article mentioned a possible series of warm-up dates there in spring. However it was in Lancaster UK that the Healers made their live debut! They then spent a few weeks opening up for Oasis in Europe, followed by a number of UK club dates in September. Unfortunately ALL of 2000 passed without the CD's official release! Hopes were high for seeing it by spring of 2001, but it wasn't until mid-June that jmarr.com announced that Johnny had started up his own label, Pacific (distributed in Europe by Universal). After initial announcements of September release dates [Sept 10, Sept 24], the single was finally officially released in the UK on Oct 1, 2001.

Oh yeah, if you're wondering about the band name, Healers, Johnny told The Guardian (Aug 18 2000) - that the name the Healers is taken from 19th-century medium Madame Blavatsky's The Secret Doctrine.

Early in 2002, it was reported that Johnny had been in LA remixing and recording finishing touches to the Healers album. At the end of July, Johnny Marr + the Healers had signed with imusic (Artists Direct) with the Healers core members being listed as Johnny, Zak Starkey and Alonza Bevan. The signing announcement said the CD was due in January 2003. In September, the release date was revised to Feb 2003 (Boomslang's actual US release date - Feb 4, 2003).

Word came in November 2002 that the Healers would be opening for Pearl Jam in Australia that coming February 2003, and that there would be a brief US club tour just prior! SEE THE RESULTS!!

In the meantime, Zak's been busy with The Who, and OASIS! The Oasis rumors surfaced in Jan 2004, and were confirmed by April that he was going to play on track for the upcoming album as well as for some live gigs.

Posted on Johnny's official site:
May 12th (2004)| ZAK PLAYING WITH OASIS
In a reaction on the news that Zak has joined Oasis live, Johnny says: "It was always my plan that I demo the new Healers songs on my own. Zak is doing Who gigs and it's no big deal, or surprise that he's going on the road with Oasis."

Just when it looked as though there would be no Healers activity in 2004, October brought word from Johnny via a Manchester Online news article (from the 5th) about his fave Oxfam store. The story ends with the report that he "is recording a second album with his band The Healers, which will be out in April next year, when he will go on tour."

November of 2004, Johnny appeard on Soccer AM, saying he was halfway through recording the new Healers album, and that he'd already missed the record company's deadline, reckoning it would be out in March '05. He apparently was recording all of it by himself, but when it came to the drumming, releazed he needed to get the band back into the studio.

Hints that the line-up was being altered came in a brief mention in an online article about the band Little Barrie, Feb 2005 - which contained:
"Recent highlights range from packed solo shows to nods from artists including Johnny Marr (who tapped Cadogan for his Healers project)..."
though he is not listed in later reports of Healer activity.

On March 31, 2005 Johnny posted that "The new Healers" were in full swing and a new album and tour was to be expected - but no details were given.

The band is currently in rehearsals preparing for their appearance at Patti Smith's Meltdown in London June 24th. Also on the bill are Bert Jansch, Roy Harper and Robyn Hitchcock to name a few.

Given all of the various reports, and the large time span for the demo-ing and recording, it is still unclear if Zak has any involvement on what will surface on the album. Stay tuned ...