January 11, 2004 brought rumors to the web (via The Star newspaper) that drummer Alan White was out of the band Oasis. Reports varied widely about the method and the reasons, but the band's official website and NME confirmed the departure in a January 16th statement:
"Alan White has been asked to leave Oasis by the other band members. There are no plans to replace Alan. The band's scheduled recording sessions remain unaffected."


Zak's name is thrown about in a write-up on an Oasis fansite: www.live4ever.us in a "News Room" article dated Jan 11, 2004. However, after extensively searching all of the news stories reported on the web during that time, I didn't spot his name in any 'real news' publications. There did seem to be a small grass-roots movement amongst Oasis fans in a few message forums and newsgroups to recruit him, [Fan's reasoning based on their admiration for his drumming and a '6 degrees of Johnny Marr'-type explanation of prior association with Oasis!], and that may or may not have been the source for his name being thrown in the mix at first. But then things got a bit more interesting.

Seems Oasis was at first keen on making due without a replacement:

(from The Sun Jan 17, 2004) "...'Noel can’t be a***d with getting a new drummer when he knows he can do the job perfectly well himself. He thinks it’ll probably be the best drumming heard on any Oasis album.' ..."
"... When Oasis tour the as-yet-untitled album next year they will draft in a session musician to play on most of the tracks. But they are not ruling out the possibility of Noel doing a PHIL COLLINS and taking to the drums and singing. "

Must admit, would be interesting to hear Zak on a track or two ...

NME (Jan 20, 2004) reported that ex-Proud Mary drummer Terry Kirkbride was most likely the replacement for Alan. For those still playing 6 degrees of Johnny Marr: Terry Kirkbride was in Proud Mary with guitarist Adam Gray, who was in the original incarnation (2000) of the Healers, with Johnny and Zak.

About mid January, I started to receive emails from people in the 'biz' who were NOT associated with Oasis or Zak directly, who did not want to be quoted, but claimed they had it on good authority that Zak was in, and in full. But that little detail has yet to be confirmed or denied by anyone that counts (ie. Oasis - Zak). [See update]

On March 12th, it was reported by various sources that the opening band for The Stereophonics night at the Teenage Cancer Trust Benefit (March 30, 2004 - Royal Albert Hall) was to be a supergroup which XFM online said would be called TRUST, made up of Noel and Liam Gallagher, Zak Starkey, Roger Daltrey, Paul Weller and James Dean Bradfield (Manic Street Preachers), and Gem Archer (Oasis guitarist). The Xfm article said vocal duties would be split among the participants, and that Zak had "spent the last two days rehearsing with the band in a north London studio." Full article at XFM: www.xfm.co.uk.
The NME online reported the same bit, but included the denial by Oasis' management:

A statement from the band reads: "Contrary to reports in the UK press today Oasis will not be participating in this year's Teenage Cancer Trust concert at the Royal Albert Hall."
"They have played the event in the past but although big supporters of the TCT could not take part this year due to studio commitments. They hope the event is as successful as it has been in previous years." - NME online Mar 12, 2004

has a completely different take. After the same basic info as the other reports they supply a 'quote' claimed as being from a band source :

Update: Although Paul Weller and Noel Gallagher were both on hand to watch the Who gig the previous night, Oasis' official denial of participation was correct after all (imagine that!). No Gallaghers in the supergroup, and no Starkey. The 'super' group that opened the show March 30th consisted of Paul Weller who did the first four songs solo (and stayed for the entire set), then was joined by James Dean Bradfield (Manic Street Preachers) and Kelly Jones (Stereophonics). Roger Daltrey came out, as did Steve Gorman (Stereophonics) for the last two songs - The Kids Are Alright and Magic Bus.

Glastonbury and what drummer?

Around the end of March it was "leaked" (yeah, accidentally on purpose, just in time for the sale date - kV) that Oasis (on the 25th) and Paul McCartney (on the 26th) and Muse (on the 27th) would be headliners of this years Glastonbury Festival. First, the promoter would not confirm anyone except Macca, and the Oasis official site would only say they were still in the "talking" stage. Throughout there have been rumblings that Zak would be drumming. No WHO dates interfered directly, so it seemed possible. Things were finally settled when Noel confirmed both Glasto and Zak in a BBC Interview on May 7th.

Although still not an 'official' announcement by the promoter, Noel Gallagher let it be known that they WILL be playing Glastonbury, and that Zak Starkey WILL be drumming for them at the gig, and that they've not talked with him about becoming their full time replacement [wagers anyone? - kV], but joked that "if he can get us his dad's autograph, he's in".

“He's a good boy he's got a good haircut. Good shoes - which is important."
“It's a pity that we haven't actually got any new stuff to play but I think we kind of George Best'ed it the last time we headlined it,” he explained, “So this time will be great I think. Then again we're not doing ourselves any favours because Zak's first gig will be to 150,000 people but y'know. He's rehearsing all the Oasis songs now." - as quoted at xfm's site and NME Online.
Hear the BBC6 Radio May 7th interview that all the info comes from: BBC Music


Another Zak and a Gallagher sighting:

It seems that Noel Gallagher is a fan of The Stands and not only caught their show at The Mean Fiddler (London) on April 7th, 2004, but he got up in the middle of their set with his guitar to join them for "Some Weekend Night". Also accompanying him at the show (BUT NOT ON STAGE) was none other than Gem Archer (Oasis) and Zak Starkey.

Also spotted in the audience that night according to NME was Sean Lennon and Jade Jagger.

A third person report, published in German at prosieben.de on May 25th (sourced thru WENN), quotes "an inside source" as saying Zak doesn't want to abandon The Who, and will not become a permanent member of Oasis. He will only sit in when his schedule permits.
German text at: prosieben.de and at sadsong.net (also German)
English translation at the Live4Ever.US newsroom (May 26 2004 entry)
[Maybe he couldn't get his father's autograph for Noel ?

The June 12th issue of NME promoted as going to feature photos of the new Oasis line-up. (Turned out the photo was Drummerless!)

In the same radio interview that Noel confirms the 2004 Glastonbury appearance and Zak's participation, he also confirms that Zak will be on the upcoming Oasis release, or at least on some of the tracks:


"We've known Zak for a while and we asked him if he'd play on a few songs and he said yeah, and he has done and it's been absolutely fantastic."

And although it was originally announced that no new material would be presented, Noel & Co did decide to debut two new numbers at Glastonbury after all, sighting that the set ran short without them (they were also in the set played at Poole just prior).

Seems the recording of this follow-up to Heathen Chemistry has been plagued by numerous direction changes since beginning in Nov 2003 ... FULL RECORDING DETAILS AND NEWS

The album Don't Believe The Truth to be released May 30th 2005. First single LYLA due May 16th.

Three major 2005 stadium gigs were announced on Nov 2, 2004. Tickets went on sale 9AM(GMT) Nov 6th (with a presale available Nov 4th to members of the official Oasis Mailing list). Based on presale demand, a second show for Manchester (July 3rd) was announced prior to the Nov 6th sale. Once sales began on the 6th, a third Manchester date(June 30th) and a second Milton Keyes date (July 10) were added.

Additonal dates and US Tour dates were also announced early in 2005.

Around the end of March it was "leaked" that Oasis would headliner (on the 25th) this years Glastonbury Festival. Noel confirmed both Glasto and Zak in a BBC Interview on May 7th.
More details of Glasto and the Poole warm-up gig ...

According to The Sun (Bizarre - Victoria Newton July 2 2004):
"NOEL GALLAGHER will try out the new OASIS material at a private solo gig for 200 people at the Zanzibar Club in Liverpool tomorrow. The songs got a lukewarm reception at Glastonbury and Noel wants to test them in a new setting."

Turns out, he was a no-show. So no private concert, no new song try-out. 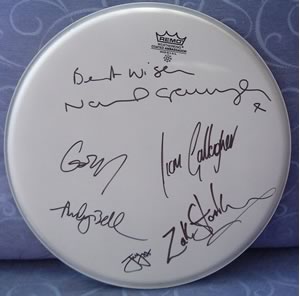