NOW available for the first time on CD!

Zak Starkey and Eddie Hardin's musical collaborations date back to Zak's early 1980's studio session days. Zak did quite a bit of sessions at Eddie's studios, both for him and with him for others. This is a project of Eddie's that Zak apparently had a great deal of input. He is noted as co-producer, and has co-writer credits on one track as well.

This is a musical adaptation of Kenneth Grahame's book of the same name. In the liner notes of a later live presentation, Eddie writes says of the original LP creation:
"Zak Starkey, son of Ringo, was my assistant throughout! He would read chapters and remind me of their theme, and the same afternoon I would write a song to compliment this theme. We devoted two very happy years into the creation of the songs..."

There was talk of staging this in London in 1985/86, but it didn't happen. Eddie did pull together another group of his talented friends (including Zak) to perform a musical stage production for German TV in 1991


*NOTE: The Angel Air release of the live CD Wind In The Willows: A Rock Concert features two bonus tracks that are from the studio LP's sessions: The Life We Left Behind, sung by Denny Laine; and Looking Forward To Tomorrow, sung by Billy Ocean

This LP was made available as "Eddie Hardin's Wind In The Willows - A Love Story" privately produced through Eddie's official site in 2000, prior to the Purple Records release, and is no longer available. 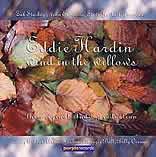 Eddie Hardin And Guests - Wind In The Willows

Purple's list of special guests on the CD (in addition to the ones listed on the original LP cover) include Maggie Bell, Denny Laine And Annie Haslam. It compares the album to the 70's Butterfly Ball project (something that many Deep Purple fans are familiar with) and states that this will be the original studio LP, plus a number of previously unreleased bonus tracks from the studio sessions, an early demo featuring Ian Paice, and two tracks from an all star live performance of the work that feature Jon Lord and Graham Bonnet.

|back to recordings with  Eddie Hardin |

|back to recordings with  John Entwistle |