In 1985, Eddie Hardin and Zak Starkey released their LP Wind In The Willows, based Kenneth Grahame's book of the same name. There had been talk of staging a live production in London around the time of its release, but it did not happen. What DID take place six years later, was a live presentation done for German Television, featuring another all-star cast of British musicians.

This has been released a number of times, with slight variations.

WIND IN THE WILLOWS: A Rock Concert
A Musical Adaptation by Eddie Hardin 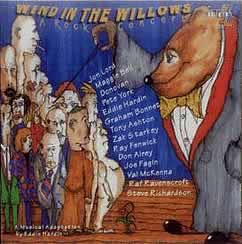 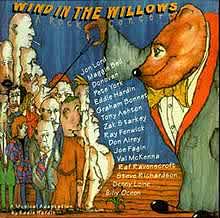 Changes found on this version

The complete version of Eddie Hardin's musical interpretation of 'Wind In the Willows'. NOW available on DVD through Angel Air/BGO!
Angel Air DVD - NJPDVD601 (Feb 2003)
Region 0, PAL [according to Angel Air's website - but amazon.co.uk lists it is Region 2 PAL]
Track Listing: Wind In The Willows (Main Theme); Good Morning To You; I've Forgotten How To Smile; Fairground Fantasy; The Wild Wood; The Badger; Looking Forward to Tomorrow; The Life We Left Behind; Badgers Theme; Maggie's Theme; Mr. Toad's Theme; Don't Seem Like Progress To Me; Can Dreams Come True; Piper At The Gates Of Dawn; Why Can't We Go Home; Wayfarers All; Wind In The Willows (reprise); BONUS TRACK Love Is All.

|back to Zak's work with Eddie Hardin|

|back to Wind In The Willows - studio LP|