Though not part of this very first incarnation of the All Starr's, he did sit in a few times, including the last two shows of the US tour at The Greek Theatre, Los Angeles, which was recorded and released on video and CD.

This time around, Zak was an official member of the band, which also included: 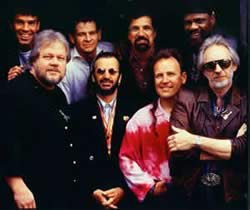 This tour began with 11 dates in Japan (June 14th - 28th), and then on to the US for 41 shows starting July 2, and scheduled to end 8/28/95 in San Diego. However the tour ended abruptly Aug 24th, when Ringo's daughter Lee took seriously ill in London.

Ringo continues his winning formula for bringing together diverse musical talent and having them gel in ways that are not always obvious from simply looking at the names on paper!

Zak did not join up with the 1997 All-Starrs, as he was busy drumming FOR THE WHO! This 4th ASB was a British lineup featuring: Peter Frampton, Gary Brooker, Jack Bruce, Simon Kirke, Mark Rivera (the yank!), and toured the US that spring - April 28 to June 7, and then Europe the following year from Aug 7-Sept 5 in 1998.

Ringo brought out his 5th incarnation in 1999: Todd Rundgren, Gary Brooker, Jack Bruce, Simon Kirke, and Timothy Cappello. They toured the US from Feb 12 through March 28, 1999.

While Ringo hit the road in 2000, Zak was busy with THE WHO AGAIN! This All-Starr #6 tour was officially called the Connections Tour 2000 and was sponsored by Century 21 Real Estate. It ran for about seven weeks beginning May 12 and ending July 1, and featured Eric Carmen (Raspberries), Dave Edmunds, Jack Bruce, Simon Kirke and Mark Rivera.

Coinciding with the American release of his album, The Anthology . . . So Far, Ringo launched ASB #7, touring the US/Canada from July 26 - Sept 2, 2001, again sponsored by Century 21. This time the All Starrs include five newcomers to Ringo's tours: Sheila E., Roger Hodgson, Ian Hunter, Greg Lake and Howard Jones, as well as veteran Mark Rivera. Lucky #7 was seen the summer of 2001. All-Starr Band #8 toured in 2003, and featured Sheila E., John Waite, Colin Hay, and Paul Carrack.

Another ALL STARR band hit the road in 2010. They just happend to be appearing at Radio City Music Hall on July 7th, Ringo's 70th. The grand finale of "With a Little Help from My Friends" was full of just that - friends and family - Zak on the kit while Dad was up front, Yoko and assorted mobs of 'friends' on stage - JAson and his three boys wheeling out a giant Ludwig cake - then followed by "Birthday" with a guy named Paul on bass and vocals.

Earlier they had a birthday celebration at the Hard Rock Cafe, and Ringo etal came out to greet and thank the crowd of well wishers. 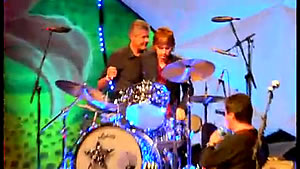 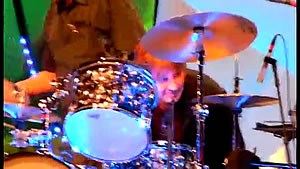 See some video on YouTube: "With A Little Help"