The All-Starrs returned to the road in 1995, and Zak was again a full member of this All-Starr team which included: John Entwistle, Mark Farner, Randy Bachman, Billy Preston, Felix Cavaliere and Mark Rivera.

Ringo, on having Zak in the band:
"It's always fun. He's my boy! You look over and there's your son playing, it's cool. It's really cool."

To announce the tour, a press conference was held in NYC on May 25th. Rehearsals began May 28th at Barnaby Studios in Vancouver, through June 9th. 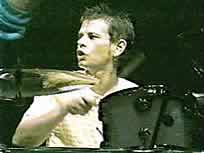 On June 7th, a sampler set was performed for the press at the York Theatre, which included: 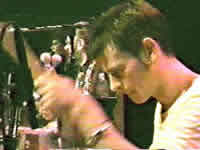 Ringo arrived in Japan on June 12th, and held a press conference with the band on the 13th in Tokyo. 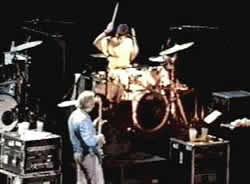 The Jun. 27th 1995 concert at Budokan Hall was taped by NHK Television. It was an abbreviated version that they would repeat at various venues when time was a factor (especially on the 2 show and multi-billed Festival dates). The biggest disappointment with this TV version is that John Entwistle's "My Wife" was cut from this show. For me and many others, this was one of the top highlights of the set, with terrific interaction going on between Zak and John.
(However, it can be seen in the video floating around of Radio City NY and Atlantic City NJ to name but a few.). This is also the show that serves as the source of the Blockbuster CD release.

A very detailed recap of the Japan Tour can be found on Hiro Satou's Beatles In Japan.

Ringo and company left Japan on June 29th. The US Tour opened July 2 in St. Louis, and include 46 dates scheduled to end 8/28/95 in San Diego. (8/31-9/3 for the MGM Las Vegas - eight shows - were canceled early on due to dispute with MGM). The tour abruptly ended on Aug 25,1995, when Ringo (and Zak) flew to London to be with daughter Lee following her collapse on the 24th in London. This made the Seattle 8/23 the final show. Four dates were canceled: 8/25 - Hilton Amphitheatre, Reno; 8/26 Monterey Fairground Apple Valley, CA; 8/27 County Bowl, Santa Barbara, CA; and 8/28 - Humphrey's by the Sea, San Diego, CA. There had also been tentative September dates for South America scheduled prior to the tours cancellation. FULL VENUE DATES

Lee Starkey had collapsed and was taken to a London hospital, where she was treated for fluid on the brain, and the cause reported as unknown. Then after being diagnosed with a brain tumor, called an ependymoma, she underwent surgery for it's removal on Sept 16th 1995 at Brigham & Women's Hospital in Boston. It was reported successfully removed, and she underwent six weeks of daily radiation following her release from the hospital.

At first it looked like there would be no official releases of video or audio from this tour, because the shows scheduled to be recorded and video taped ended up canceled due to Ringo's daughter taking seriously ill. However, the pro-shot Japanese TV video made very early on, and broadcast on Japanese Satellite TV, later surfaced for the Aug 1997's "Blockbuster Stores CD" release!

Tour program credits this time do not link directly to Zak as in 1992, but included in the "Special Thanks for Support" section are:

Concerts "in the round" are mighty tempting!
Just ask Sally G! She managed to mosey on up to Zak during the July '95 show in Houston TX, while her pal snapped the evidence! She reports that Zak didn't miss a beat!

| back to Zak with The All-Starrs  live |


Special mention: Set lists, tour dates, venues, etc have been compiled from various sources over the years. However, THE major source that verified and corrected this information was the awesome book by Chip Madinger and Mark Easter entitled: Eight Arms To Hold You - The Solo Beatles Compendium - Covering recordings, releases, tours, tv, film, video and more!
Find out more and order your copy at http://www.8-arms.com/