As they did for the 2002 US Tour, TheMusic.com 's Encore Series will be releasing "Official Bootlegs" for the 2004 Tour. These are full shows, recorded off the soundboard and releases as 2 CD sets which are manufactured and shipped ASAP after the show (they claim usually 3 weeks).
Just as they did in 2002, TheMusic has announced the boxed set versions:

CD: Then and Now 1964-2004 - [Singapore, July 2004]
Virgin Records VK 1432
This Singapore version features 3 bonus songs:
While the CD says Virgin Records, the back cover says "Vigin Records"!! The inside cover is a lyric sheet with only SOME of the songs represented. No liner notes at all about the bonus tracks. It is unclear if this is a legitimate release or an Asian Pirate.
CD: Then and Now 1964-2004 - Limited Edition - 2CD Set [Japan, Jun 23 2004]
Universal UICP9007
This Japanese Limited Edition features a bonus disc with 5 songs:

Track List: I Can't Explain, My Generation, The Kids Are Alright, Substitute, I'm a boy, Happy Jack, I Can See For Miles, Magic Bus, Pinball Wizard, See Me Feel Me, Summertime Blues (live), Behind Blue Eyes, Won't Get Fooled Again, 5:15, Love Resign O'er Me, Squeeze Box, Who Are You, You Better You Bet, Real good Looking Boy (new), Old Red Wine (new) .
Note that the release sheet says that this disc now replaces the previous MCA Greatest Hits Collection - My Generation
Roger told Virgin Radio on March 1, that they may use John Entwistle's bass parts from rehearsal tapes on the new release. (When Eonline and other outlets carried the report, they listed the release date of Then and Now as April 27th)

Eddie Vedder is quoted in NME.com (Feb 26 2004) as saying the new material is "one of the best things I've ever heard."

According to Pete's Feb 27 Diary entry, the two tracks not only feature Simon Townshend on additional guitar and vocals, but Simon PRODUCED the two new tracks "taking over from me and Bob Pridden when I realized I myself needed to be produced when in the studio. It's worked out very well." It's a great entry as he also gives details about each song's story and genesis.

The VIDEO for "Real Good Looking Boy" can be seen at Artist Direct in Realmedia and WindowsMedia formats.

Steamhammer finally released worldwide the SACD format of this 2003 release of the Who's 2000 Charity performance. It will be a 3CD hybrid, 5.1MC version of the album, will include two extra tracks not found on the Image Entertainment DVD, and be packaged in a special Digipak. The third disc is a bonus 4 song SACD of tunes recorded live at The Royal Albert Hall in 2002. Proceeds from the sale of the SACD will go to benefit the Teenage Cancer Trust, as did the standard release.

DVD: The Vegas Job: The Who Reunion Live in Las Vegas

US release was due in early February (was released in Europe Nov 2003)
- it was still being promised - now sometime in 2004 ...
Japanese release due June 23rd according to HMV.co.jp, who also lists it as ALL Region NTSC, w/Japanese subtitles (cat# PVBP959).
UPDATE: Finally a US release Nov 7, 2006 as "The Who 20th Anniversary Reunion Concert (1999)"
DVD: The Who Live in Boston

Early in May, this title first surfaced when Swedish online shop Discshop.de listed it with a preliminary release date of July 07, 2004, through Warner Music, and in PAL. This would be the Sept 27, 2002 Mansfield MA show, which was specifically filmed for DVD. HMV Japan was next to list it, with the Japanese release date as July 22 (cat# WPBR90359), and Play.com then added the UK release dated as July 19. Finally in the beginning of July, Amazon.com listed 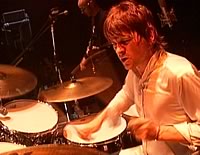 it as being available in the US & Canada from Rhine on Aug 3 and was taking pre-orders, but it shortly disappeared, followed by press that the had changed to Sep 14th.