This release was INTENDED to be out PRIOR to the start of the European concert dates, June 12th-ish. This later was pushed to July 10th, with various online shops and even the advertising posters and flyers listing it instead as the 17th, and on some others (HMV) as July 24th and finally according to Amazon.com the release date is currently (July 4th) listed as July 27th!!! This mini opera from the forthcoming album was recorded during the second and third weeks of March 2006, while Zak was out on the last few dates of the Oasis tour! F@#% B&@##t!!! Pete chose to use a drummer from Rachel Fuller's band (Peter Huntington) under the mistaken notion that doing so would get this released on time. Oh great. [SO be sure to see them live and hear what the drums rightfully should have sounded like on the mini opera - and here's hoping that he was mic'd well enough to be captured and done justice on the official bootlegs!]

Endless Wire:
(the full album with some Zak)

Zak is on "Black Widow's Eyes" and all live tracks.

Originally touted as coming in September, it was finally announced on August 24th, that The Who had signed a new deal with Universal Republic securing the Oct 31st release of "Endless Wire". The full track listing was revealed in a Sept 6th news posting on Pete's website (titles slightly revised Sept 15th - the 6th post originally had Out On The Endless Wire instead of 'Endless Wire' and a very other minor variations.) 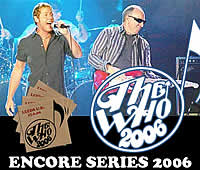 It was announce June 16th that once again, as in 2002 and 2004, the 2006 Who shows will be available as official bootleg CD's for EACH SHOW via the Who Encore Series from TheMusic.com. In addtional to the 2CD sets and collector's edition boxes, the series this time will also feature DVD's of each concert!
CD's and DVD's can be ordered seperately, as a cd/dvd combo per show, or in complete Collectors Box sets, including limited edition versions. Shortly before the US Tour began, the 2006 Encore Series was expanded to include all (most?) of the US shows. 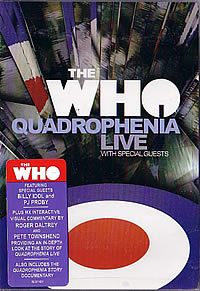 Rhino/WEA: 603497163724
June 6, 2006
This is a single DVD release of just the Quad show originally contained in Tommy & Quadrophenia Live with Special Guest 3 DVD version released in 2005. This single disc contains the entire Quadrophenia performance as well as the extras "The Quadrophenia Story" and Interactive Visual Comentary by Roger & Pete.

North American DVD - see Encore Series above
Live at Leeds 2 - 2006-06-17 ?
According to Pete's June 16th Diary, this return to Leeds University was being filmed in Hi-Def by Spitfire Films. Also of note, Leeds Uni is the only show NOT to be included in the Encore CD/DVD Series, leading to speculation that it will be released commercially at some point down the road.
The Vegas Job (1999) - US release 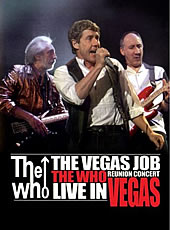 Passport Entertainment
THIS is finally the US release of the DVD formerly known as "The Vegas Job" - aka the Pixelon iBash show! Release date Nov 7 2006
Originally promoted under the horrible title "The Who 20th Anniversary Reunion Concert" (see original cover art!). This ridiculous title was changed BACK to "The Vegas Job" in time for the release! 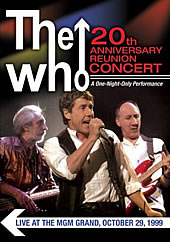