So far, no official releases exist for any of these bands. However, a large number of demos were recorded by them over the years.

Zak's first band, formed with the two Seaton brothers who lived next door. In 1980 they changed the name from The Next to Dead Meat.
band details

The Next - Geoff Seaton, Graham Seaton, Kerry Benford, [Roger Lewis 1980], Zak Starkey - recorded two demo sessions at Startling Studios: 4 songs in late 1979, and 5 songs in mid 1980. Titles included: Power of the Other Side, You're a Liar! (sung by Graham), Have A Little Something Else, You Love, Power, Ride A White Stallion, and Sci Fi Fact."

In 1980, Zak, Kerry and Roger left Dead Meat. For a short time they, with Martin Jowers on keyboards, went back to calling themselves The Next. This lineup served as the backup band at a session for dancer-hoping-to-turn-pop-star, Erin Lordan. Two of the songs recorded, What's a Girl Gotta Do and Please Me, were written by bandmember Roger Lewis. The band also recorded a number of tunes for their own use during this time. Another know song title from around this time is All I Want Is You, written by Martin Jowers.

During 1980, the band, minus a lead singer, recorded about 15 songs. In April of 1981, they found their lead vocalist - Ian Parry. He laid down the vocals on ALL the tracks in one marathon session at Startling Studios. A few more sessions were eventually held at Rock City Studios later in the band's existence. 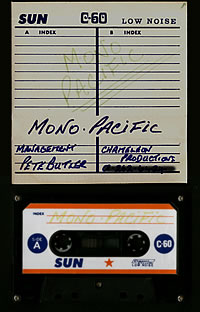 |You are at Monopacific recordings|