Continuing the history of the Early Days that began as The Next and Dead Meat ...

Following the split from Dead Meat, the band went back to temporarily using the name "The Next" just to have something to call themselves!

This lineup served as the backup band at a session for dancer-hoping-to-turn-pop-star, Erin Lordan. Two of the songs recorded, What's a Girl Gotta Do and Please Me, were written by bandmember Roger Lewis. The band also recorded a number of tunes for their own use during the session.

[factoid] This session took place at Startling Studios the day Whitesnake finished recording "Come & Get it" - Which is how Zak met Micky Moody for the first time. Seems Mickey and Neil Murray had gone down by the pool to turf out the gatecrashers hanging about, who turned out to be non-other than 'The Next' and company!!

Back in Chesterfield in late 1980, Liverpool native Ian Parry answered a rather generic - (but surrounded by a bold box!) - advert in Melody Maker, along the lines of 'London band looking for young rock vocalist'. After a few weeks of waiting and not hearing anything, he phoned the number in the ad a few times, and was eventually told that the auditions had been postponed due to the death of John Lennon. [At the time he had no idea why this terrible event would affect his audition date]. In February of '81, he got the call from band manager Peter "Dougal" Butler, to come down to London. He did, but a train scheduling mix-up resulted in Ian arriving not only late, but also into the wrong station, thus missing the audition. He did get to spend some time with Dougal, and was promised another chance.

Also under consideration for the lead singer slot had been a Bracknell vocalist named Steve Annetts. Instead, Steve chose to stick with getting another band off the ground called 'After Dark'. [They eventually had a few releases and toured the UK with Diamond Head. Gary Moore later offered Steve the job as his vocalist, but the record label wanted someone else.]

Ian Parry's second audition chance came April 26, 1981. For this he was asked to sing a few of the songs the band had previously recorded with Erin Jordan, as well as another from that session - written, played and sung by Martin Jowers titled All I Want Is You.

Shortly after his April audition, Ian returned to London as the still unofficially-named band's new lead singer. In a one day-long marathon session, he put down vocals to about 15 songs the band had previously recorded during the past year. A few more sessions were eventually held at Rock City Studios later in the band's existence.

As was the case with the previous incarnations of these bands, they were able to rehearse most of the time at 'The Lodge' on the grounds of Tittenhurst. The band's regular gig venue appears to have been The Bridge House in Bracknell, but they did venture to other pubs, band showcases and even a benefit concert in Morocco for The Moroccan Cancer Fund. 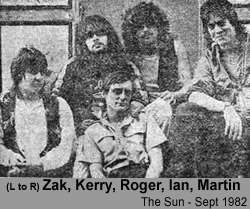 Late Summer of '82, Butler had arranged for a interview and photo-shoot in hopes of promoting the band. Photos were taken in various locations on the grounds of Tittenhurst Park, including near, on and eventually IN the lake! The savvy journalists suggested they dry off with a few pies and pints at the local pub - obviously hoping that a little of the spirits could make for a more, say, *interesting* article. The result appeared in the The Sun on Sept 23, 1982, as: "Being Ringo's Son is A Total Pain". Though it manages to convey a few bits of information about the band, including some pics, the article is mainly comprised of Zak's rather blunt, Remy Martin tinted comments about family, friends and others. As a result, the band now found themselves in need of a new rehearsal space as 'The Lodge' was no longer at their disposal!

|You are at Monopacific details|