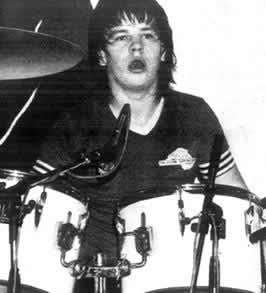 For The longest time, the only info I had on Zak Starkey's early musical career was my 1981/82 clipping from some notorious gossip magazine. It mentioned Monopacific as the name of Zak's "second" band managed by Peter "Dougal" Butler (Keith Moon's former personal assistant),and happened to include a picture!

But in 1998, I stumbled across an obscure reference to another band member! Buried deep in the biography of the Dutch metal band Elegy was a small gem - the lead singer was a former member of Monopacific! I now had another name - Ian Parry. Since that time, I have had the good fortune to have been contacted by former band members, associates and their friends who have all graciously provided leads, information and even photos of that time period. I am extremely grateful for all the help they have provided!

If YOU have any further information or corrections about these bands, (maybe they played a pub near you!) PLEASE email me!

Zak's first band, The Next, was formed with the two brothers that lived next door. The members where all in there late teens and early 20's - Zak being the youngest at 12 (or 13). As with most of these early bands, Zak was able to occasionally make use of 'The Lodge' at Tittenhurst for rehearsals. The band often appeared at The Bridge House, performing original rock tunes, and some covers.

The Next recorded two demo sessions at Startling Studios: 4 songs in late 1979, and 5 songs in mid 1980. Titles included: Power of the Other Side, You're a Liar! (sung by Graham), Have A Little Something Else, You Love, Power, Ride A White Stallion, and Sci Fi Fact."

In 1980, the above lineup changed their name to DEAD MEAT, when they learned that there was apparently another band using "The Next".

Around the time of the name change from The Next, they added a second guitarist - Roger Lewis (from a band called Heartbreaker). The musical direction of the band began to change, and late in 1980, Kerry, Zak and Roger split to form what would eventually be named - Monopacific.

When Martin Cullen left the band, Derek Dickens - who had been in a band previously with now drummer Adrian Metcalfe - joined on bass. Later in 1982, Adrian left to join The Nashville Teens, and the band found themselves drummerless for a previously booked gig at The Bridge House in Bracknell. Former bandmate Zak Starkey filled in on drums for this night. Afterwards, a drummer named Darren (aka "Thunderstick"), was brought into the band. Also around this time, (1982/83) they changed their name to "Solid State". They continued on until about 1984, when Graham moved to Guildford and joined a band called Panther.

When Zak, Kerry and Roger split from the band Dead Meat, they temporarily went back to calling themselves "The Next", and would eventually settle on Monopacific.

|You are at Zak's Early Bands|