A warm-up show was held here just days prior to the NYC Premiere.
Mike Bailey was there in the front and was kind enough to send in few shots! He also managed to snag Zak's sticks at the end of it all!
Check out a few more of Mike's pics!

Unfortunately, I couldn't make it there in person. However, I was lucky enough to send my old pal Tony, who managed a few shots and a nice chat with Zak! Check out a few more of Tony's pics! 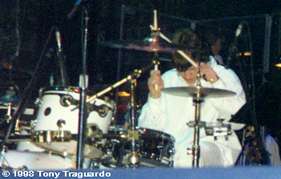 I WAS there for this and ZAK ROCKED THE HOUSE!!!
"See Me Feel Me / Listening To you" was worth the price of admission alone!

"With an amazing Drummer on drums at center stage, the (British Rock) symphony has... rhythmic muscle ... cleverness ... (National) summer tour is to include Roger Daltrey of the Who as guest vocalist..." - New York Times

Your Beacon ticket stub got you in to the club where later in the evening, Frampton, Zak, Keith Levenson and a few of the singers from the show, joined G.E.Smith & his band for a few blues standards! (Pictures anyone?)

Kathy Pettit reports that though the crowd was a bit smaller, and many attended via "casino comps", the crowd was VERY into the show!
"The show was as great as the Beacon and Zak was terrific, as usual." [As was her niece Aimee - one of the vocalists!]

Looking for more reports on this or any other show! Please send 'em on in!

Although some preliminary and promotional materials list Zak a drumming, his schedule did not allow for him to be part of either of these presentations.

Zak Starkey along with Simon Townshend and others toured Europe with The British Rock Symphony during the summer of 1999! Guest vocalists included Roger Daltrey, Paul Young and Gary Brooker. If you caught a show, please fill us in with details!! 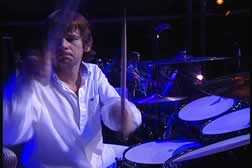 Most of these shows were filmed, and a video was later released!
(see releases)

Zak was not a part of any of the performances of for this year, in either the US, Australia, or South America, even though some early promotional materials contained his name as drummer or special guest.

|back to Zak's work with British Rock Symphony |