The setlist was slightly altered from its 1998 version:

Unconfirmed show! If you have details, please send them in!

Audience member Brian Gotts was kind enough to email his thoughts:
"I was pleasantly surprised... Roger Daltrey was an eye opener. There is definitely life after fifty. What an example to the 'So Called' stars of today. I think him and Alice Cooper could open a school for potential rock artists to teach them how to put over a song. They were both magnificent. Gary Brooker was a great surprise. The voice was exactly the same as I hear on the radio every day singing 'Nights In White Satin'... I just wish I had the time and the money to follow them around the country to see the rest of the shows

Unconfirmed show! If you have details, please send them in! 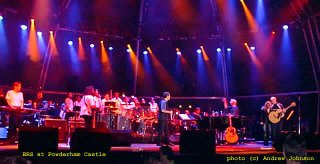 This is a full shot of the stage from Powderham Castle as graciously submitted by Andrew Johnson.
(Click on picture for larger version)

Billed as a "picnic in the park", the event took place on the grounds of a stately home.

Although the concert setup did not provide any video screens for the crowd, there were 9 cameras filming.

The Rock band line up was the same. The Guest vocalists list was missing Alice Cooper. 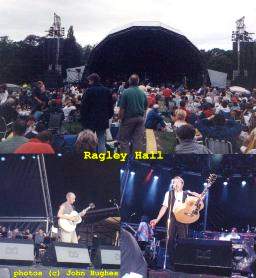 Photos through the generosity of John Hughes!
Click on picture for larger version.

John was also kind enough to forward some local reviews:

The audience were clearly there to have fun and even when it began to rain the enthusiasm was not to be dampened and the proceedings were finally brought to a close with a spectacular firework display.
This had been an ambitious project, the profits going to struggling young musicians. The Heart Of England Orchestra had been hired, complete with choir, designed to support a front-lining traditional rock band and thereby provide an extra dimension to the sound. - The Birmingham Post

So we had Darlene Love belt out 'Jumpin' Jack Flash', Paul Young getting his tonsils around 'Imagine' and Procol Harum's Gary Brooker resurrecting 'Whiter Shade of Pale'. Things didn't really start hotting up until Roger Daltrey appeared at the end of Act 1 to perform a medley of 'Start Me Up', '5:15', 'See Me Feel Me', and 'Listening To You'.
The show was nearly stolen at the start of the second act by Nikki Lamborn of new band Never The Bride whose version of Led Zepplin's 'Stariway To Heaven' was stunning. Daltrey quickly grabbed back the honours with 'You Better You Bet', 'Pinball Wizard' and 'Who Are You?' - Birmingham Evening Mail 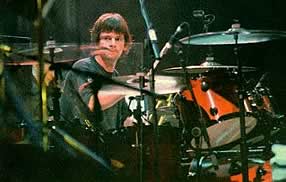 The set list may have been altered slightly due to Roger Daltrey arriving late (and possibly abbreviated as well):

(as kindly reported by Senti thanks!!!)
"On July 5th he performed in Liverpool during the Summer Pops Season as part of the British Rock Symphonys UK Summer Tour. A symphonic combination of classical and rock musicians performing a tribute to The Beatles, The Rolling Stones, The Who, Led Zeplin and Pink Floyd. The concert started late due to a technical problem which was really Roger Daltrey being stranded at the airport due to stormy weather because hed spent the morning performing as King Of The Fairies for filming somewhere in the south of England."

Approximate set list:
Universe Suite (which included moments from Across The Universe and Comfortably Numb); Peace Suite (which included Imagine, Blackbird, Give Peace A Chance and Come Together); Kashmir; Norwegian Wood; Another Brick In The Wall, Ruby Tuesday and Street Fightin Man (NOT ROGER!); Stairway To Heaven; A Whiter Shade Of Pale;

"Roger Daltrey suddenly appeared on stage and gave a remarkable performance for someone whod been up since 6am. Zak finally got to perform the Who songs he really excels at now that the star vocalist had arrived. Storming through 5:15, See Me Feel Me, Listening To You, You Better You Bet, Pinball Wizard and Who Are You."

"At the end of that section all of the musicians left the stage except for Roger who didnt see the point of everyone leaving when they knew theyd got to come back on again.
As each performer was introduced back on stage, the conductor announced If theres a better drummer -- I havent worked with him as Zak bounded on stage ... The concert was rounded up with With A Little Help From My Friends."