2007-June-01 - Later with Jools Holland" BBC2 [UK TV] - ** Appearance canceled
Listed on Later's website as "Coming Up: Fri 1st June: The Who, Kaiser Chiefs & The White Stripes". The Who were forced to cancel last minute and according to The Later website and mailing list email day of show: "and yes we haven't mentioned a band called THE WHO as unfortunately Roger Daltrey lost his voice the night before the show. They promise to make it up to us all."

2007-Nov 30th - Later with Jools Holland" BBC2 [UK TV] - Series 30 - Episode 05
On Nov 21st, The Who recorded 4 tracks on Later with Jools Holland (mistakenly first announced as going to air Nov 23rd). The band was originally scheduled to appear back in June, but Roger's voice was gone. This time, Simon Townshend was not available to appear as he was out of the country at the time of the taping. Says Pete in his Nov 25th Blog at thewho.com: "I've had to face the fact that I very much enjoyed playing with the band on Later, The Jools Holland Show on BBC TV last week. Roger and I both missed Simon, my brother, but we managed OK."

The band performed: The Seeker, Tea & Theatre , My Generation, and Baba O'Riley. Roger Daltrey and Pete Townshend were also interviewed by Jools Holland.

The tour that began in 2006 rolls on through the US and Europe once again in 2007 with "talk" of Japan and elsewhere.

Most shows are again being released as official bootlegs via TheMusic.com: The Who Encore series includes choice of 2CD sets or DVD's available as single purchases, combo purchases, and deluxe and limited edition box sets, the proceeds go to charity.

View full details about the show 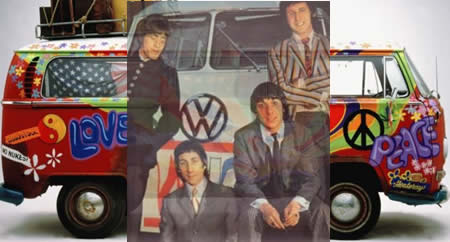 Announce Sept 3rd - the band will perform on the 2nd day of this three day minibus festival. This eventis for registerered owners and drivers. "No tickets for the concert have been issued to retailers, since the gig was arranged exclusively for active participants of the Meeting. " [6 degrees players note: Also appearing that day will be German pop-star Sasha as his 'alter-ego "Dick Brave"]
More info about the meeting