This is a puzzling project. Chris Tassone is touted as "Canada's famed Chris 'Ringo' Tassone. The uncanny likeness in both departments has led to the amazement and involvement of a whole host of stars..." Actually, he does looks a bit like Ringo, and the studio affects on his vocals make him sound a lot like Julian Lennon. But this is still an enjoyable disc - 60's Pop meets the 90's. Lots of Rutle-esque Beatle musical influences (like the guitar in the intro of "I'll Be There" and "It's Alright", and nearly all the background vocals & harmonies). Their cover version of "You Can't Do That" is reminiscent of Harry Nilsson's, in the way it throws licks from other fab tunes throughout (especially love Entwistle's shades of "Day Tripper"). The cover of the tune "Stagger Lee" is pretty good too. 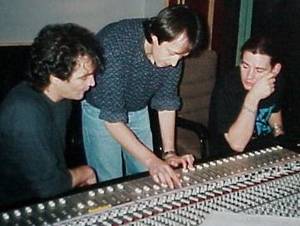 Each player is listed on the cover followed by his "credits" (ie. John Entwistle - The Who, Georgie Fame - Van Morrison Band, etc). Other than his "look-alike, sound-alike" claim to fame, no other past musical credits are given for Chris Tassone. Allan McDougall is listed as "Gaffer, BMI Int'l". He is one of the co-producers of the album, which is dedicated in his memory. John Entwistle's The Rock CD (the limited edition anyway) is also dedicated in memory of Allan. Is this the connection that got everybody together? 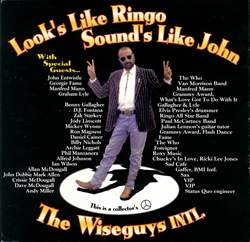 - find it used on Amazon!

|back to Zak's work with John Entwistle|