Pete York, original drummer for Spencer Davis Group, has over the years, organized tours that showcased talented drummers from a wide variety of genres. Each series also resulted in an album release, and there have been several "best of" packages reissued over the years.

Although first reported in the works back in Jan 2002, the DVD "Pete York's Super Drumming, Vol 1" was released Dec 17, 2002 as a codefree, NTSC DVD with remastered 5.1 Dolby Digital PCM stereo sound, on Inakoustic of Germany. Zak is featured on two tracks. (see releases).

These sessions were Analog recorded live at a former church in Staig/Ulm, Feb 8 - Feb 20, 1987 produced by Wolfgang Schmid and Pete York. According to the CD cover, these performances were featured in the ARD-TV series Super Drumming, broadcast August 3,10,17,23 & 24 1989. The CORE BAND, referred to as - The "All Styles" Band - was made up of Brian Auger (keybrds); Wolfgang Schmid (bass); Gerd Wilden Jr.(keybrds); Peter Wölpl (guitar). 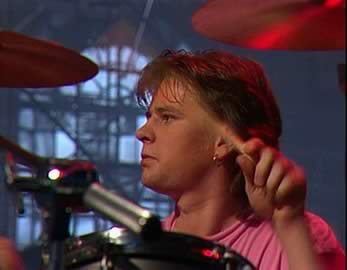 This CORE BAND - The R & B Band - was made up of Colin Hodgkinson (bass, vocals), Brian Auger (Keyboards), Miller Anderson (Guitar, Vocals). Plus a few more guest like Jon Lord.

|See releases for all 3 volumes of Superdrumming|

|back to Zak's work with  Eddie Hardin  |