Penguins surfaced on MySpace around September of 2006 and began to slowly post tracks and photos. But the band saved their live debut for July of 2008.

During these 2008 gigs, the band consisted of: 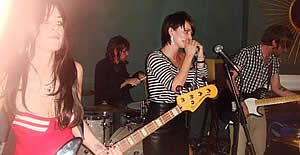 2008- Live Club Gigs here and there around London

Announcement spotted on myspace June 22nd.
The setlist reportedly contained the 4 songs that have appeared on their Myspace page as well as one called "The Day I Met My Boyfriend". Penguins on this night consisted of Zak Starkey on drums, Shane "Dodger" Devany (of Black Dove Experiment) on guitar, Tatia Starkey (of Belakiss) on bass and Sharna Liguz vocals and harmonica.
[info and cellphone snaps thanks to attendee Sophia L]

|back to Zak's work with Penguins |