Zak had run into Micky Moody way back in 1980, when Whitesnake was recording Come & Get It at Startling Studios. Seems Micky and Neil Murray had mistaken Zak and the rest of The Next hanging around the pool as "gatecrashers" ! Zak went on to work with Micky in the Moody Marsden Band, and Micky has guested on a few of Zak's projects.

For the longest time, not too much was known about Nightfly, other than the color photo and tour itinerary that appeared in Kerrang!

Recently, a scrapbook of press clippings has turned up, and a few new factoids came to light. Zak and Micky Moody hooked up while doing some session work with John Entwistle. According to a few clippings, the band was formed around December of 1984, after Micky and Zak got tired of waiting since at least June of 1984 for Entwistle's project to get off the ground. From the band's press release: Zak's dislikes - "Waiting for people to form bands".

An internet bio about vocalist Spencer James reveals that:
1) Spencer James is older than he looks!
2) Nightfly, or a slightly earlier configuration, was once called HEYDAY

Since January of 1986, Spencer James has been the vocalist (and guitarist) for The Searchers (yes, THE Searchers). The Searchers Bio goes a bit into Spencer's background:
* Born 1953, Hayes, Middlesex (NEVER would have guessed that from the photo!);
* Lead singer for the band FIRST CLASS (yes - the "Beach Baby" summertime pop classic!);
* "When that had run its course Spencer went on to experiment with Zak Starkey and Boz Burrell as part of a band called Heyday.";
* Then on to The Spencer James Band, who happened to play The Red Lion in Brentford as a support for The Searchers;
* The Searchers Jan 1986 - to date.

At some point in their history, the band was "produced by John Entwistle". Exactly when and exactly what is unclear. To date, nothing has seen release. Bob Young was quoted in a few articles in Feb of 1985 as saying if things went well (during the tour), the band hoped to begin recording that summer, and that some record companies were interested, but that the band unsigned.

Appearances - The Warming Up The Band Tour: 1985

2/03 - Gwent - Cross Keys Institute
(not on Kerrang's list) A number of articles about Zak's marriage mention this as the opening date of the tour.
2/03(sun) Peterborough - Key Theatre's Glasshouse 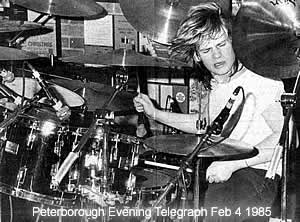 (not on Kerrang's list) tickets 2.75 at door.
This was apparently a last minute addition to fill in a date vacated by a band called "The Captians of Industry" - which featured Eric (as in Wreckless) Goulden. Review mentions that this was a 1.5 hr show in front of a capacity crowd, and confirms that this was only the second date of the tour, but the review also claims it was a 35 date tour!! 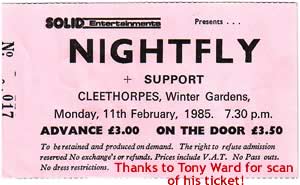 Audience member Tony Ward was kind enough to write in about this gig:
"... the crowd kept shouting for Whitesnake and Bad Company songs, but I don't remember them doing any ...
Can remember that they had a lot of original material and promised to be recording shortly (at the time I thought the material was strong enough to buy if they ever released any, hence how I found your web site, I was checking if they ever did but missed the release).
As you can see I had ticket 17, the crowd was a fairly decent turnout, but Cleethorpes had just had Magnum play a warm up for the release of "On A Storytellers Night" and Uriah Heep were playing a couple of weeks later. It was a very relaxed gig with banter coming from the crowd and the band responding back. Recall Boz headbutted the microphone and drew a spot of blood on his forehead (all done in humour).
... the few memories I have are happy memories of leaving a gig thinking that my mates had missed a excellent concert. 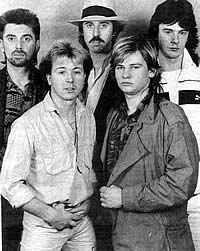 2/12 - Hull - Tiffanys
The Daily Mail Hull - Feb 15 1985, gave the show a negative review, and reported extremely light turnout.
2/13 - Bradford University
2/14 - Whitehaven - Whitehouse Club
2/16 - Wishaw - Heathery Bar
2/17 - Dumfries - Oasis Club
2/18 - Bannockburn -
(not on Kerrang's list) Listed in a Scottich Daily Record Feb 06 article about Zak, the band and his marriage.
2/20 - Huddersfield Polytechnic
2/21 - Blackburn - King Georges Hall
(one article lists this as "Blackburn's Windsor Suite") The support act was Blackpool band Exocet.
2/22 - Birmingham Polytechnic
2/24 - Dunstable - Queensway Hall* (opening act="Solstice")
2/25 - Thatcham - Silks
2/26 - Oxford Polytechnic
2/28 - London - Marquee Club
Music Week March 23 1985 - "Nightfly aren't the world's fastest starters; the first 30 minutes were pedestrian - tedious even - but then they eventually found their feet they put out some entertaining and precise blues rock. Former Whitesnake guitarist Micky Moody cut loose into a couple of flowing solos and found admirable support for his work in Starkey's workmanlike drumming." - Jeff Clark-Meads
Sounds Magazine Mar 16 1985 panned the gig in it's brief review, saying the material sounded dated and tedious.
3/02 (sat) - Clacton - Princes Theatre
(not on Kerrang's list) tickets were 3.50 or 4 at door
an article after the show about the promoter frustration with trying to stage shows there, says that there were only 150 in the room for 800.

If by any chance you attended one of the gigs, have old ticket stubs, photos or reviews, please let us know!

In 1985, Micky Moody and Bob Young put out this humorous book. It was basically a glossary of all terms encountered in the "Rock N Roll" world. It featured many funny cartoon illustrations, and "insightful" definitions! Zak has his own entry:
Zak: An extremely rare Christian name which has been bestowed upon the eldest son of Ringo Starr - Zak Starkey, née Starr.
Also, one of Zak's road projects, a crossword puzzle, is also included in the book.