Joe Walsh and Zak Starkey most likely met during the recording of Ringo's Old Wave album, in 1984. Joe was part of Ringo's All-Starr band in 1989, on which Zak would occasionally sit in, and was part of the 1992 All-Starr's which had Zak as a full member of the band.

I am unaware of any studio recordings of Joe with Zak, but they did work together a number of times live.

Joe Walsh was a member of this first All-Starr tour, and Zak would occasionally turn up to keep Dad's chair warm on Ringo's 'down in the spotlight' numbers. See the All-Starrs for details.

Zak Starkey was Joe's drummer when he opened for George Harrison on April 6, 1996 at the Royal Albert Hall. The event was in support of the Natural Law Party, which has its roots in the teachings of the Maharishi Mahesh Yogi. This also marked the first time Hari appeared on stage in the UK since the Beatles' break up.

The Setlist: Pretty Maids All In A Row, In The City, Life In The Fast Lane, Goin' On Down, and Rocky Mountain Way 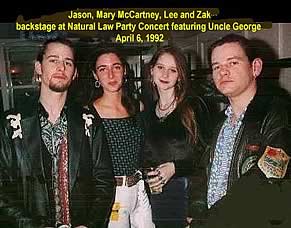 There are two bootlegs in circulation that have Joe's, Gary Moore's and George's sets on 2CDs [Hari & The Hijack Band and Have My Love]

This time out, Zak was a full member of the band that again included Joe Walsh!
See the All-Starrs for details.

Following the 1992 Ringo All-Starr Band Tour, Joe Walsh hit the road briefly, and his drummer for this mini tour was Zak Starkey.

Looking for tapes, reviews, set lists etc! If you got 'em, please let me know!