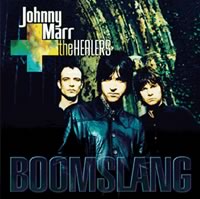 The CD, once rumored to be called Play Dumb, then said to be titled Boomslang, was hoped to have been released in the UK before the end of 2000, and again in the Spring of 2001. Earlier in 2002, Johnny was said to have been in LA remixing and recording to put the 'at last' finishing touches on the album. At the end of July 2002, it was announced that Johnny Marr's Healers had signed with imusic (Artists Direct) with the Healers core members being listed as Johnny, Zak Starkey and Alonza Bevan, and the CD was due in January 2003. Artists Direct (iMusic) had the track listing posted in Sept of 2002, and the long awaited album was finally officially released Feb 4th, 2003 (Feb 3 in the UK).

|back to releases by Johnny Marr + the Healers |