Adrian Smith has been a guitarist, vocalist and composer in Iron Maiden from 1981-1990, 1999-present. October of 1989 would see the release of his first solo effort under the banner of A.S.a.P (Adrian Smith and Project). A few of the songs on the LP originally surfaced back in 1985, when Nicko McBrain's frustration of not playing after winding down from an extensive Maiden tour and looking at a six month break, drove him to rent a rehearsal studio and invite Adrian along to jam. The two invited more friends - including Dave Colwell and Andy Barnett - and worked on all sorts of old songs from pre-Maiden days as well as new bits and pieces of stuff not suited for the Maiden outlet. What started as a fun pass-time, started gaining momentum and resulted in a number of "secret gigs", including the infamous Marquee Club Dec 1985 - billed as "The Entire Population of Hackney". Songs performed that night that would later turn up with A.S.a.P included Silver & gold, Fighting man, School days, and When She's Gone.

During Maiden's sabbatical after the 1988 Seventh Son tour, Adrian set to work on his solo effort, which allowed him to not only showcase his vocal talents, but to also dust off and explore some of his songs, harmonies and arrangements that didn't fit in with his regular gig. According to Adrian "Our music is straight ahead rock- melodic, but with a hard edge." Much of the foundation had been set in the rehearsals and secret gigs of 1985. This time around, Nicko would not be present for the recordings:

"We rehearsed for three weeks and we were kind of loose about the whole thing. We had a lot of fun and went out to clubs and things, but we didn't really hone it all down too much in rehearsal, we just got together, had a few beers and effectively played a gig. We didn't do much pre-production either until the producer Steven came in at the last minute.
The majority of the guys in the band were members of a band called "Ran". Says Adrian, "On drums we had Zak Starkey, Ringo's son who came in for us. Originally Nicko [McBrain] was going to do it but he had set a date to get married which happened to coincide with the first few weeks of us recording the album, so he couldn't do it. But it worked out really well with Zak anyway." - Interview with Lori Smerilson, Faces Rocks Magazine, July/August (1989) 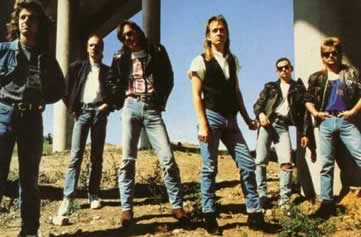 After going through numerous name choices, which included Adrian's Wall as a very strong candidate, he settled on A.S.a.P. In the Faces Rocks interview he goes on to say that they made a video for the title track Silver & Gold, which "I think is in the process of being banned from MTV at the moment because we have bits of the album cover, the naked girl, that I must say is very, very tasteful. You can't see anything specific. It's kind of an artsy shot."

There is a small bit in a French magazine called Hard Force (Nov1989), that seems to say that recording was delayed slightly due to an injury to Zak's wrist either just prior or right at the start of the recording sessions.

The band in this format never made any live appearances. There is a bootleg in circulation of the Dec 1985 Marquee "secret gig" by ASaP's predecessor "The Entire Population of Hackney" featuring Adrian Smith on vocals, Nicko McBrain on drums, Dave Colwell, Andy Barnett, etc etc, performing a number of the tunes that would eventually end up on the ASAP LP.

Adrian stated in a few interviews that gigs to support the solo effort were not possible as Maiden was gearing up to start work again:

"Yeah, we did actually look into doing a tour, but it was just too hectic. I need to give myself a bit of a breather before the next Maiden project. Hopefully it will just create enough interest in me so that I can do that second album and a tour which would be better planned and organised so that it could run parallel to my work with Maiden." - Metal Forces -#43 - Oct 1989

After recording this album, Adrian had in fact returned to Iron Maiden. But early in the songwriting sessions for No Prayer for the Dying, he and Steve Harris had a major difference of opinion about the band's approach, and Adrian soon departed.

Ironic, as it was his commitment to Iron Maiden that put off the chances of promoting and touring A.S.a.P to the fullest. After some time off, he regrouped many of the A.S.a.P associates and formed The Untouchables. In the mid 1990's he put together the band Psycho Motel.

Although he joined Iron Maiden briefly on stage for the final number at Donington in 1992, he wouldn't rejoin the band in any official capacity until 1999, when he and Bruce Dickinson returned to the fold.