Substitute: The Songs Of The Who

This tribute album was produced and compiled by Bob Pridden, and released in June of 2001. The final track on the album is non other than The Who, with Zak on drums, taken from the Royal Albert Hall Teenage Cancer Trust concert!

The Concert For New York 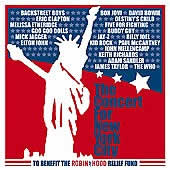 Columbia C2K 86270 - Various Artist - The Concert For New York City
This is a 2 CD set, and features 3 of the 4 songs the Who performed that night: Who Are You, Baba O'Reilly [sic], Won't Get Fooled Again

On Feb 19 2002 this was released in SACD Multichannel/Stereo Format: Columbia 86270. Track listing is the same.

The Who and Friends at the Royal Albert Hall

This video was released on Sept 25, 2001. A wonderful review of the technical aspects of the release can be found at CurrentFilm.com

On November 27th, 2000, the Who headlined an all-star charity concert at Londons Royal Albert Hall. Special guests include Noel Gallagher and Eddie Vedder, as well as Paul Weller and comedian Phil Jupitus. All all proceeds from the event were donated to the Teenage Cancer Trust, which helps to build hospital units which are specially tailored for teenagers.

The event was shown on Pay-per-view in the UK on Dec 2 & 3rd, and an announcement was made that the event will be available on DVD, produced by MCY.com (originally due to be released Spring 2001).

The DVD release was celebrated with launch party that included a Celebrity Charity Auction held Sept 24th at the Cobden Club, in Kensal Town, West London. Some of the items up for bid included a Bee Gees T-shirt, an Eddie Vedder guitar (the highest item at £6,500) , a Boy George dress, a Bryan Adams bandanna and a Paul McCartney lithograph. Roger did his best to ensure they got the highest prices possible by bidding for every piece, with out actually winning an item. Also in attendance were bandmates John Entwistle and Zak Starkey.

MCY - Image Entertainment - OD0659MYDVD (US) [Sep 25,2001]
(Released by Aviva International and Direct Video Distribution - UK)
This is a 2 DVD set. Don't let the "special guests" intimidate you - this is PACKED with raw live WHO only performances! And the sound quality is amazing - DTS and Dolby Digital 5.1 . Selections from the concert appear on disc one (the entire show is not here - see Who 2000 for full set list) . Disc two has the extra "special features" which include rehearsal and backstage footage, an interview with Roger, and multi-angle sequences of "Pinball Wizard".

Track list (Disc 1): I Can't Explain, Anyway Anyhow Anywhere, Pinball Wizard, Relay, My Wife, The Kids Are Alright, Bargain, Magic Bus, Who Are You, Baba O'Riley, Drowned, Heart To Hang Onto, So Sad About Us, I'm One, Behind Blue Eyes, You Better You Bet, The Real Me, 5:15, Won't Get Fooled Again, Substitute, Let's See Action, My Generation, See Me Feel Me

[was also released on VHS Image cat# 831, without the "special features" bonus' of DVD disc2] 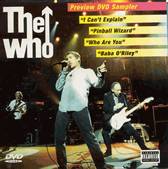 Given out exclusively at the Feb 2001 Grammy Awards Show, this is a four track promo DVD produced by MCY.

The disc promotes the fact that the full length version (2 DVD set) will be in DTs and Dolby 5.1, and will also feature documentary footage and fan testimonials.
A larger picture and further details about the disc and the Grammy award were posted at Pete's former official Site [petetownshend.com] in the News section titled "21 February 2001 Royal Albert Hall DVD ".