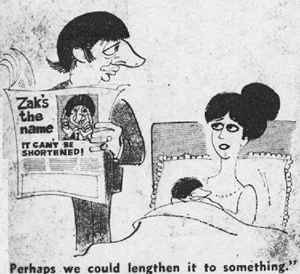 A baby is born to Richard and Maureen Starkey. Why such a public debate over a simple name? Seems nothing about the lives of a Beatle was exempt from scrutiny!

Ringo chose Zak because it's "a nice strong name that can't be shortened…[a] mad cowboy name that had been spinning round my brain at the time".

Ok, so the general public in 1965 was not so hip as history likes to think! Every aspect of the Beatles life was subject for debate, including something as personal as naming their children! Fans were NOT impressed by name chosen for the lad as evident by this man-in-the-street article and as well as the cartoon!

Dig the comments like "it sounds foreign" and my fave - "should be something simple like Peter or John." Tell me, just how much simpler can "z-a-k" get?