I do not have any information about how or why this session came about, but Zak Starkey is the drummer on this Laurence Archer solo LP [Possibly due to the Herne Place Studios connection, or that producer Martin Adams may actually be former Startling Studio engineer Martin Adam, co-producer of Entwistle's The Rock]. The Japanese only release falls into guitarist Archer's time line sometime AFTER the bands Stampede (1981-83), Magnum (for seconds in early 80's), and Grand Slam (with Phil Lynott 1983-84) and BEFORE the bands LA Secret (1986), and UFO (1990-92). Keyboardist Mark Stanway also hails from Magnum (1980-1983) and Grand Slam (1983-84), and in 1985 he returned to Magnum where he stayed until the band ended in 1995. Bassist Greg Leidaman went on to play in Archer's band LA Secrets in 1986. 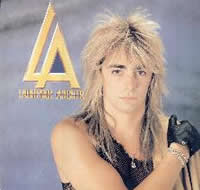 Tracks:
Can't Get Away * Hard Fight * One Time * Hiding Away * Two Hearts * When You Were Young* Claudiette * Surrender * Shades of Blue*

Apparently there was a Japanese single released from this LP: