Potency: The Best of Ian McNabb contains a few tracks with Zak ...

The Icicle Works was a band from Liverpool, featuring Ian McNabb (guitar/vocals), Chris Sharrock (drums), and Chris Layhe (bass). Probably best know in the US for the song "Birds Fly (Whisper To A Scream)" off the self-titled (1984) LP. In 1988, following the release of their fifth LP "Blind", Sharrock and Layhe departed. For a short time, Zak Starkey held the drummer's slot. Dave Green (keyboards) and Roy Corkill (bass) joined from Black, and in 1989 [Ian]McNabb and Corkill recruited Dave Baldwin (keyboards), Mark Revell (guitar/vocals) and Paul Burgess (drums).

, as well as work on a few demos for Epic, which Ian says haven't seen the light of day. In the end, Zak could not commit to becoming a full time member of the band.

One source says Ian and Zak met while working on a anti-heroin gig in London in 1986 [Live-In World].

In 1997, Ian McNabb was playing bass in (at the time, former, Waterboy) Mike Scott's touring band when they found themselves drummerless mid tour. Zak filled in for a few dates until their new replacement could take over.

In June 2002, Ian McNabb along with Zak, were part of the backing band for Ringo's set at The Cowdray Concert Tibetan Benefit.

The following is from Al's Review Archive, by Al Crawford:
"Rock" couldn't be further from the laid-back vibes of the Wobble remix. It's easily the heaviest thing McNabb has ever recorded. Straightforward hard rock, with dreadful clichéd lyrics (although McNabb's tongue is quite probably firmly in his cheek on this one), primeval drumming courtesy of Zak Starkey, buckets of grinding guitar, a chanted chorus, and so forth. The presence of Nick Warren's keyboards on a track of this type might seem out of place, but they lurk around in the basement filling in for the absence of a bass guitar. An interesting song, and markedly different from the previous track.- Al Crawford

Also from Al's Review Archive:
I'm not sure where the third track came from. It may be recently recorded but I suspect it's more likely to be a relic from that very brief incarnation of The Icicle Works that included Zak Starkey, the son of a rather more famous Liverpool musician. "Woo Yer" is straightforward rock, with competent but unexceptional drumming from Starkey and McNabb playing everything else.- Al Crawford

Zak is featured on the b-side:
You Must Be Prepared To Dream (edit) [4:43] /
That's Why The Darkness Exists [3:22]
Zak Starkey - drums
Nick Warren - Keyboards
Ian McNabb - the rest

The above singles are taken from this album, but Zak is only drumming on the NON-LP B-sides of those singles. He is not credited as playing on any track on the LP itself. However, Zak is among the MANY people Ian mentions on the "Thank You" page of the CD booklet.
(back to Zak's Discography Index ) 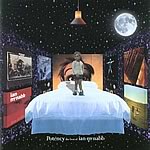 Both tracks listed as 1993, with Zak Starkey - drums
Ian McNabb - the rest. Produced by Ian McNabb
Engineered by John Pennington. Recorded at The Windings

Thanks to generous readers, all FOUR dates (plus a surprise 5th) of The Icicle Works gigs with Zak have been confirmed!: