Neil Young has been doling out gems from his vaults of 20 years of Bridge School Benefit concerts. Vol 3 became available on Nov 13, 2007 and features two tracks from The Who's 1999 appearance: Boris the Spider and Won't Get Fooled Again. The series is available exclusively through download via Apple's iTunes. 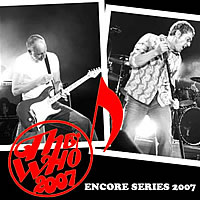 As it was in 2006, the 2007 Who shows are to be available as official bootleg CD's for EACH SHOW via the Who Encore Series from TheMusic.com. In addition to the 2CD sets and collector's edition boxes, the series will also feature DVD's of each concert!
CD's and DVD's can be ordered seperately, as a cd/dvd combo per show, or in complete Collectors Box sets, including limited edition versions.

This is a documentary film by Justin Kreutzmann who had "unprecedented access" to the band while on the road in 2006. The footage was compiled into a special DVD available only to Platinum members (those who shelled out the $60) of TheWhoTour.com. The discs began shipping to members in early August 2007. It runs approx 70 minutes.

Amazing Journey: The Story of the Who & Six Quick Ones 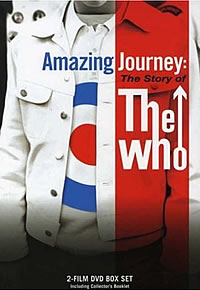 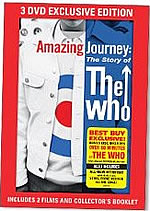 The first DVD: Amazing Journey: The Story of The Who is billed as a film for 'mainstream fans' that chronicles the history of the band all the way from the genesis through to "Endless Wire" with fresh interviews with Pete and Roger, concert footage etc. It actually had its world premeire Sept 12th at the Toronto International Film Festival.

The second DVD: Amazing Journey: Six Quick Ones is billed as the disc for 'die-hards' that features four segments on the musical abilities of the four original members. The 5th segment is "Who Art You" about Mod culture and the 6th "Who's Back" chronicles the recording of "Real Good Looking Boy".

The set will also contain a book and bonus content.

Best Buy featured a 3rd bonus disc that contained "The Who Live In Chicago 1979".