The band ICE was a project with Zak Starkey and Amos Pizzey at its core from 1988 - 1990. Zak played drums, guitars, and percussion and Amos supplied the vocals. Both took part in writing the material.

If you need a recap about Zak's history, please see The Bio.
Early rumblings about this band surfaced in the April 1988 BeatleFan, which mentioned that "Zak reportedly turned down a tour with the Norwegian group A-Ha to pursue a record deal for his band ICE." Reports that the band was "on the verge of signing a major record deal" circulated in Dec 1988.

Amos grew up in West London with four adopted brothers of Afro-Caribbean origin. One bio stated that "At twelve he joined a Sound System team and chatted and sang on the mike..." which is probably very English-English for "he joined a Rap group". Amos Pizzey began his recording career at the tender age of 14, when he appeared on Culture Club's first three singles and debut album. He then moved with his family to New Mexico, but soon returned to London, where he and bassist Cass Lewis formed Dark City. They made one album with producer Stewart Levine, and then broke up. But most people will probably recognize Amos from his vocals on the #1 US single by The Escape Club called "Wild Wild West". He also appeared on Boy George's "Everything I Own" before forming Ice with Zak Starkey.

After ICE, Amos joined the Jesus Loves You tour for 2 years. He then teamed up with childhood friend Dee Vaz, writing and producing material for artists including Eve Gallagher and Jag Deep Singh. In 1993 Amos released a few singles as a solo artist: "Only Saw Today/Instant Karma", "Sweet Music", "Let Love Shine" and "Church Of Eden". More recently, he teamed up with DJ Jeremy Healy to form Bleachin'.

There is apparently a little nifty story concerning the "Only Saw Today/Instant Karma" release. Seems Amos took his inspiration for this from the John Lennon tune, adding his own strong antifascist message to John's powerful positivity. An early 12" version caught the attention and support of quite a few UK DJ's. A remix issued by an Italian record label soon hit #1 on the Italian dance & radio charts. It was in the process of being remixed for the UK market, when they received the dreaded "cease & desist" letter from Yoko & BMG Music, stating that Yoko Ono had refused permission to use the chorus from "Instant Karma". Amos gave his old band mate Zak a call, asking for help. Zak called his father, Ringo Starr, who took a listen, liked what he heard, and agreed to call Yoko and plead Amos' case. Remarkably, Yoko agreed to change her mind, and the track was finally able to be released worldwide.

CD Single: "Livewire" / "Under My Thumb" 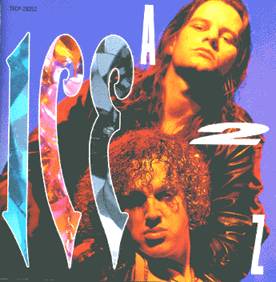 This is guitar driven, strong vocal Brit rock: Amos' vocals range from hard rock to funky blue-eyed soul and everything in between. This CD reportedly reached the Top 10 in Japan!

ICE had been scheduled to appear at a May 29, 1988 Aids Benefit, but the event was canceled.


The First Japanese concert by ICE, the band featuring Zak Starkey on drums, was held June 12 at the Club Citta theater in Kawasaki, near Yokohama. Amos Pizzey handled all the lead vocals and Starkey played guitar on two numbers and drums on eight others. The response of the near capacity audience was not too enthusiastic, but Onoshima says the concert was well done for a new band.- As reported by Gen Onoshima in Beatlefan Vol 12 No 4, 1990