When Ceausescu's regime collapsed in 1989, the horrendous state of Romania's orphanages was brought to the attention of the world. According to the Foundation's website (www.raa.ro): 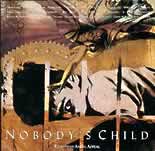 The world reacted with indignation and tears. People felt moved to do something and within weeks some were traveling to Romania to see how they could help. Amongst them was Olivia Harrison. She set out to determine how funds already donated by Apple Records and Elton John could best be used.
The result of Olivia's visit was the founding of the Romanian Angel Appeal. Its immediate goal was the renovation of orphanages and institutions for abandoned, orphaned and sick children.
With the help of Barbara Bach-Starkey, Elton John, Yoko Ono and Linda McCartney as well as the support of the media and the British public, one million pounds was raised within six weeks.

One of the ways moneys were raised was through the release of a various artists LP/CD, and a single by The Traveling Wilburys. Ringo contributed "With A Little Help From My Friends" recorded live at The Greek Theatre in LA, from the 1989 All-Starr Tour. Zak was sitting in on drums that evening.

The track can be found on the following releases:

|back to Zak on releases by Ringo's All-Starr Band |