In an interview with Billboard, (2010-01-29), Pete says that they were planning to play Coachella, the New Orleans Jazz festival and a number of other things (An Italian site quoted them in Verona on July 12), and that he convinced ROger that they should do the Superbowl to start things all off. Then, shocker, Pete changed his mind! He's too busy writing to go on with the later itinery, but the Superbowl and TCT are still on. (Until the next change of mind - LOL!)

A special Sirius/XM WHO channel was set up to celebrate the Superbowl Appearance. It ran for 5 days (Feb 4th 3:pm-Feb 8th 11:59PM) on XM40 or Sirius 16. Features tracks and recent interviews.

The Who perform for about 12 minutes at halftime, complete with massive stage, massive lighting, lasers and pyrotechnics!

Set was a Medley of sorts:
Pinball Wizard, Who Are You, Baba O'Riley, See Me Feel Me, and Won't Get Fooled Again. 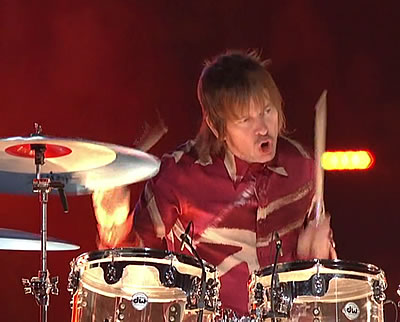 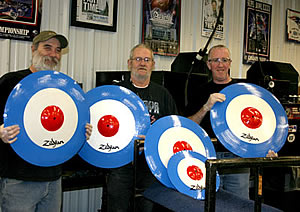 Zak's Kit (as well as his shirt, pst ... you could sell thousands ) was also the talk of the evening! The kit was an acrylic one (though badged as DW, it seems to have been made by RCI drums of Bridgeport CT for DW/Zak - thanks Mike B.!) AND his Zildjian cymbals - ALL of them including the hi-hats, where painted roundels top and bottom.

Though the info was dropped by Pete in an interview with Billboard on Jan 29th, It was officially announced by TCT on Feb 1st that The Who would perform Quadrophenia on Tues March 30, 2010. Tickets went on sale Feb 5th, with prices from £35 -£100. The week will feature: Depeche Mode, Them Crooked Vultures, a Comedy night, Suede, Noel Gallagher (2 shows), Artic Monkeys, JLS, The Specials, and finally - The Who. 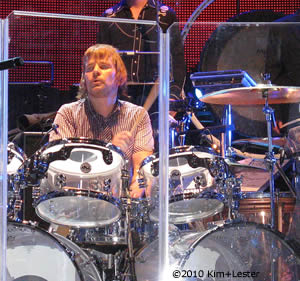 As promised, the Who performed Quad, with 15 musicians including a 5-piece horn section, and special guests Eddie Vedder as the Godfather and Tom Meighan from Kasabian as Ace Face. Simon once again reprised his bus driver role! 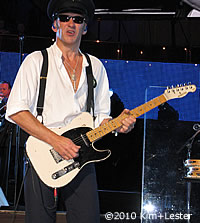