The Who - Live at the Royal Albert Hall:

Announced Dec 20, 2002 - A double CD of the Teenage Cancer Trust RAH 2000 Show was to have been released in March of 2003. [This is the same show that has been previously released on DVD in Sept 2001]. The report indicated that all proceeds would go to the TCT, and it would also include a 4 track bonus CD with songs from the band's 2002 RAH-TCT performances: I'm Free, Young Man Blues, I Don't Even Know Myself and Summertime Blues. 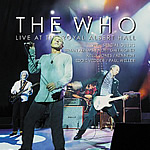 This was to have been originally released June 30, 2003 on SPV (a gmbh label) in two forms: A double CD with two bonus tracks from the 2002 RAH shows, and a 3 disc SACD/CD digipak version, where the third disc is a bonus CD containing all four songs listed above.

It appears that SPV decided to drop plans for the dual format SACD/CD world wide (it DID get released in this format in Japan on July 2!) (

SACD being released Jan 6, 2004!) and instead released a regular three disc CD where the third disc is still the bonus 4 tracks (June 30 UK,Europe and July 22 in the US). It is currently unclear if this 3 CD set is STILL limited and will eventually be replaced by the 2 CD w/only two extra tracks after the initial run is depleted.

Live at the Royal Albert Hall - Steamhammer - SPV 093-74882 [3 CD]
Made in Germany and packaged in standard double-wide 3 CD jewel case, complete with cardboard slip case. The German pressing appears to have been sold in the US, UK and Euro as domestic product, although some copies in the US did not have the cardboard slipcase.

SACD/CD Hybrid, packages in 3 card, mini LP type sleeves, with photo-credit booklet, bio with titles in English, main text in Japanese, all housed in a slip case, with obi and inside a resealable poly bag, with a Who sticker.
(Japanese 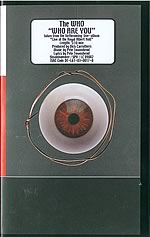 A promo video was distributed to promote the live album release. The cover and video label stated:
'Taken from the forthcoming live-album "Live at the Royal Albert Hall"
Length 5:10 min. Was issued in a hard case with graphic insert, marked "For promotion only" and had the media promotions company contact sticker affixed to the back.

The Vegas Job: The Who Reunion Live in Las Vegas

Direct Video Distribution Ltd.  DVDL001D - UK/Euro REGION 2
Released Nov 10, 2003 (US release due 2004)
This is a 90 minute DVD that contains the 1999 Las Vegas Pixelon "iBash" concert. This helped start the ball rolling for the return of the band to to the road! The money earned from this performance allowed The Who to finance the charity shows that followed and was a glimpse of the fire and power of what was to come in their subsequent UK and US tours over the next couple of years!
5:1 and DTS sound, no widescreen, and includes interviews with Fans, Roger and John. Unfortunately the alternate camera angles that were available on the ultra-short lived Pixelon site are NOT included here ;-(