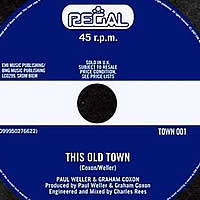 It was announced June 21st that Weller & Coxon were to be releasing a collaborative single, "This Old Town", July 2 via nternet download and July 30th on vinyl all on Regal Singles Club. The announcement also proclaimed that on drums was none other than Zak Starkey - [and most news outlets preceeded the normal pedigree 'SOR' with "drummer of The Who and Oasis" with order of named bands dependent upon demographic of readership it seems- kv]

The single "This Old Town" (Weller/Coxon) / "Each New Morning " (Coxon) & "Black River" (Weller), is produced by the pair and engineered by Charles Rees. The Regal Singles Club 7" vinyl release is limited to 5000.