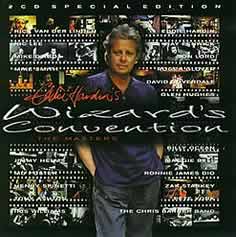 Disc 2 of this set features the 10 main tracks from the Japanese Wizard's Convention 3 CD (see that page for song details). There are also 5 additional unreleased tracks. These were produced by Roger Glover, and seem to have been recorded sometime in the late 70's.

By far, this is the best sounding collection of this material to date. Zak Starkey appears the following tracks from Disc 2: Slippery Slopes (# 4), Without Your Love (# 5), Perfect Survivors (# 6 - drums AND guitar), Why Can't We Go Home (# 8 - drums AND guitar) 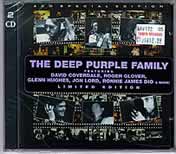 An unauthorized US release of the above material surfaced in 2000 on the Big Eye label. It removes Eddie's modern likeness from the cover, removed his name from the spine and obscures his name on the cover with a sticker, calling the CD The Deep Purple Family. Using photos from the liner notes of Eddie, Lord, Glover and even ZAK on the cover, the CD is clearly being falsely represented as a Deep Purple CD. Neither Eddie or Eagle (the authorized licensee of the UK version) have any involvement with this US release.

|back to Zak's work with Eddie Hardin|