Some background: Primal Scream singer Bobby Gillespie has put together what the press releases are calling a 'supergroup', to perform a variety of eclectic cover tunes at the 1234 Festival in Shoreditchon. They are called "The SIlver Machine", after the Hawkwind single and are expected to cover the likes of The Creation, Flamin' Grooview, Chocolate Watchband, The Troggs, MC5 and more. It is being touted as a definite one-off thing. 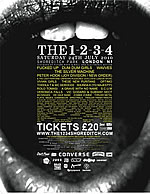 How Does It Feel, Are You Going To Be There, Teenage Head, Psychotic Reaction, I Wish You Would, I Want You, Fire of Love, Making TIme, I Can only Give You Everything, Sister Ann and Action Woman.