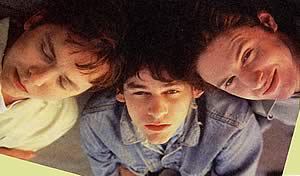 Around 1992, Will Owsley, Millard Powers and Zak Starkey - The Semantics - recorded what would eventually turn into a power-pop cult classic!

The Genealogy is more like this:
Ben Folds and Millard Powers had been together in the band Majosha formed in 1988. In that band, Ben played bass, Millard was on guitar. Ben (leader, piano & vocals of Ben Folds Five - a man of many hats, now solo BTW) was responsible for introducing William Owsley and Jody Spence (Semantics original drummer) to Millard Powers. Ben did apparently sit in on the drummer's throne for one or two demos, and was even ASKED to join the band as their drummer, but passed on the offer.

The Semantics signed in the early 90's with Sony Music Publishing. Sony had just started to branch out from its predominantly country music focus. John Kalodner signed them for a record deal with Geffen, and was apparently also responsible for hooking them up with Zak Starkey. The band even lived for a short time in Zak's mom's house in (near) Los Angeles.

Geffen was to have released the record in 1993, but it never did came out. They were too busy looking for their 100th version of Nirvana to recognize the brilliance of what lay before them!! An epic mistake that should have been ranked right up there with Decca UK turning down that infamous "guitar group" in 1962.

By mid 1993, the band was no more. The album languished in the vaults until 1996, [though a tape of the material was making the rounds among power-pop traders], when the album, Powerbill, received a distribution deal with Alpha Music in Japan. Released only in Japan, is was basically out-of-print by 1998. For quite some time, these CD's were commanding major prices on the online auction sites! It was also one of the most common, high ranking "want" on many BF5 and powerpop fans' trade lists. Especially after the awesome major label debut of OWSLEY in 1999! [full details about The Semantics - POWERBILL CD]

This is a HIGHLY RECOMMENDED CD!!! It is terrific, catchy power pop - nifty melodies, harmonies, intelligently-playful lyrics, chock full of homages to the great pop masters of the past and present. You like Jellyfish, Bare Naked Ladies, The Records, The Rubinoos, XTC, etc etc, this one's right up your alley. How this managed to stay buried for so long is beyond me!

2010: R.I.P. Will Owsley - you are missed.
April 30, 2010 - Will Owsley was pronounced deat at Williamson County Hospital in Franklin TN, sometime midday. According to the Tennessean, the 44 year old's death was "an apparent suicide". He leaves behind a wife and two sons from his first marriage.

Will Owsley's (1999) debut - OWSLEY is brilliant - check it out!
Owsley's follow-up The Hard Way (2003) is also great! He was also Amy Grant's guitarist (16 years) and a valued session man around Nashville.
Millard Powers had a CD available through the original MP3.com back in 2001. (w/ new recording of "Jenny Won't Play Fair"). He also played bass for Ben Folds' 2001 Tour. He joined up with The Counting Crows in 2005, and appears on their 2008 Saturday Nights & Sunday Mornings album. HE is also on their iTunes Live from SoHo2008 release.

|back to recordings with  The Semantics |