Penguins surfaced on MySpace around September of 2006 and began to slowly post tracks and photos. But the band saved their live debut for July of 2008.

During these 2008 gigs, the band consisted of:

The 2011 live line-up so far has been just Zak and Sshh. They performed one London gig and the Beady Eye gigs as a duo. Word on the streets is that they are actively putting together a band, but line-up is unclear at this time.

After the messy break up of Oasis in August 2009, Liam quickly reassembled the remainders of the band sans Noel, and formed Beady Eye (Liam, Gem Archer, Andy Bell and Chris Sharrock).

In January 2011 they announced March 'inaugural' dates and then a proper April 2011 UK tour to follow the release of their debut album "Different Gear, Still Speeding". They will also be touring the Japan, the US and Europe.

On Feb 15th, the official Beady Eye website announced that PENGUINS would be supporting the upcoming Edinburgh and Newcastle gigs (which were already sold out!).

Beady Eye are pleased to announce that Zak Starkey's band Pengu!ns ** will be supporting at their forthcoming sold-out gigs in Edinburgh and Newcastle.

Zak - son of a certain famous 'mop-topped' drummer - has previously played drums with The Who, Johnny Marr, Paul Weller as well as Oasis, with whom he recorded and toured for several years. In addition to Pengu!ns, Beady Eye will be supported by Steve Cradock and Cheap Freaks during their UK tour.

Pengu!ns will be supporting - All tickets are free - you have to win them - enter at: http://www.itunesfestival.com/gb/lineup
July 23 2011 - Stoke Newington - The Baby Bath House - SwitchBlade
Pengu!ns Facebook page says they will be here on th 23rd. even tho they are not listed on the official site/line-up (as of the 22nd).
Oct 7, 2011 - Edinbugh - The Caves - This Feeling

Pengu!ns with Dexters, The Stagger Rats and Modernfaces
Various attendees reported mixed crowd reactions as well as some "audience participation" ! 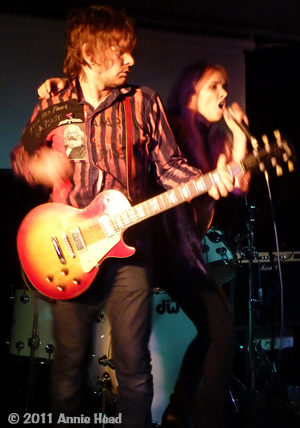 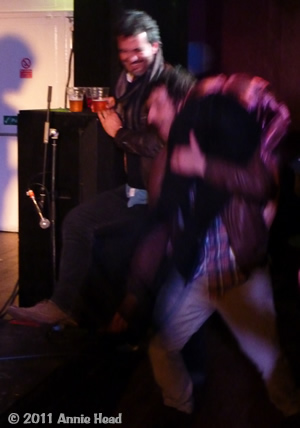 |back to Zak's work with Penguins |