New album "Dig Out Your Soul" due Oct 6th

1st single "The Shock of the Lightning" due Sept 29th

Official, Zak is no longer working with Oasis, Chris Sharrock is the next victim.

Late 2007 saw the band enter Abbey Road Studios to begin recording their 7th studio album with producer Dave Sardy. They regrouped in LA early 2008 to finish recording and start the mixing process. History shows that extended periods of peace and harmony within Gallagher-ville is simply not a given. But this time it appears that the turmoil was not between the brothers! Though there had been a few insider rumblings a month or two before, it was the Sun on May 12th 2008 that reported that Zak and Oasis had parted ways. They quoted their source as saying "There have been arguments with Noel Gallagher and general disagreements. It looks like the album will be his last involvement with the band."

When the departure actually took place is unconfirmed. He was apparently still with the band mixing at the very end of February when the Liverpool Echo ran a blurb about Ringo showing up to visit Zak at the studio and popping in on the Zutons who were recording at Sunset Sound Studios.

As of the end of June there had been no official statement from either camp to confirm or deny the departure. The deafening silence seemed confirmation enough. Therefore it was safe to assume the upcoming live dates in Canada would be Zak-less. In fact, the immediate report days after public news of Zak's departure was that the new drummer would be Chris Sharrock! (Mirror 2008-05-15). But again, no official word from the band came until the August 2008 #177 Issue of Mojo that hit the stands in early July. It contained an interview with Noel that confirmed Zak's departure and Chris' entrance.

Chris is an amazing drummer with an massive resume: Icicle Works, The La's, Lightning Seeds, World Party, Dave Stewart, Lou Reed, Robbie Williams. Chris and Zak's paths have crossed many times over the years. When Sharrock left Icicle Works in 1988, Zak stepped in for a few live gigs and worked on some demos. In 1997, when Chris left The Lightning Seeds, Zak came on board for their 1997 and 1998 tours, the 1999 album Tilt and the 1999 and Jan 2000 tours. Let's hope that this doesn't mean Zak will be drumming for Robbie WIlliams next ...

The 7th studio album - "Dig Out Your Soul"

Recording began at Abbey Road late 2007. Oasis returned to LA in mid January to start mixing the new album with producer Dave Sardy at The Village in LA. While reports during the recording late in 07 were saying "August" for a possible release date, most reports about the mixing taking place were now hinting "spring", only to be immediately followed by more speculation for August again. As the mixing concluded, the release date most often quoted was "in September", with a recent report in print that said "Oct 6th".

Late Nov 07 Liam was quoted as saying "We've got off to a good start. There's not one acoustic song on it -- it's all f***ing rocking." While January's Q reported Noel "is living out his Burt Bacharach fantasies, talking up the successor to 2005's career - steadying Don't Believe The Truth as "colossal" and "60s sounding", complete with "100-piece orchestras and choirs". One song, 'I Wanna Live In A Dream In My Record Machine' is a 10-minute psychedelic epic." NME adds "Stop the Clocks" ("the best thing I've ever written"- Noel) and Liam's "The Boy With the Blues" (could be "like a gospel track or something" - Noel). According to The Daily Star (Jan 22) 'Boy With the Blues' is most likely lined up to be the first single, and names three more tracks: "To Love" and "Guess I'm Out of Time" and "Evil Eye", as well as the previously mentioned "I Wanna Live In A Dream In My Record Machine".

On June 19th, it was revealed that Oasis - via Big Brother Recordings, signed a new long term deal with Sony BMG (their former label). It covers the next three studio albums and distibution and marketing of the existing catalog. This new profit sharing arrangement meand that all new and existing material will be released on Big Brother worldwide.

Rumours about the album title, "Dig Out Your Soul" surfaced a day or two prior to the official announcement. On June 24th, it was made official. The first single would be: The Shock Of The Lightning - to be released September 29th. The Album title would be: Dig Out Your Soul - with a release date of October 6th. 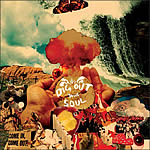 July 14th, the official Oasis website released the tract listing:
Bag It Up, The Turning, Waiting For The Rapture, The Shock Of The Lightning, I'm Outta Time, (Get Off Your) High Horse Lady, Falling Down, To Be Where There's Life, Ain't Got Nothin', The Nature Of Reality, Soldier On.

February rumours:
As usual the summer arena and festival headline rumors start early. Early january saw reports that the O2 arena already dropping names like Oasis, Coldplay and U@ for summer concerts. In Feburary, Oasis were listed as second on the bill to Coldplay for Rock In Rio June 1st - by a Portuguese music rag.

March Rumblings:
The Calgary Herald printed a blurb on March 19th that said Oasis was to play sometime in August in Calgary and most likely the venue would be Pengrowth Saddledome. Also rumoured was a warm-up gig in Winnepeg on Sept 1st. March brought the official announcement that Oasis and the Foo Fighters would be headlining this years Virgin Festival in Toronto September 6th & 7th. Oasis will be the closer of the festival on Sept 7th with Paul Weller and Sterophonics preceeding them on the bill. A handfull of Canadian warm-up dates were officially announced on March 31st. These shows will have Ryan Adams and the Cardinals as openers, and will have Chris Sharrock in the seat.

Post Zak Departure announcements:
Since the May news of Zak's departure, a few more Canadian dates had been added, as well as a mini-tour in Nov of Mexico. All to have Chris Sharrock on the kit.