Feb 23 2005 - Noel Gallagher in an on-air interview with Philly's Y100 confirmed that Zak Starkey will be the drummer on the US 2005 Oasis Tour.

As part of the week long Teenage Cancer Trust Benefit at the Royal Albert Hall, The Stereophonics were booked to appear March 30, 2004. On March 12, various sources announced that there was to be a 'supergroup' formed to serve as the opening act. XFM online reported that this group would be called TRUST and would be made up of Noel and Liam Gallagher, Zak Starkey, Roger Daltrey, Paul Weller and James Dean Bradfield (Manic Street Preachers), and Gem Archer (Oasis guitarist). The Xfm article claimed that vocal duties will be split among the participants, and that Zak had"spent the last two days rehearsing with the band in a north London studio. Full article at XFM: www.xfm.co.uk
NME online reported similar bits, but also printed the denial from Oasis' management: "Contrary to reports in the UK press today Oasis will not be participating in this year's Teenage Cancer Trust concert at the Royal Albert Hall." Leave it to The Sun online to have a completely different take. After reporting the same basic info as the others, they managed to get a 'quote' claiming: "An Oasis source said: 'Zak has been desperate to play with Oasis for a while. He’s a big fan — and they’re big BEATLES fans — so everyone is happy.' " - Bizarre - The Sun 12 Mar, 2004 [ "desperate" .?. how "Bizarre" -- kv !]

Although Paul Weller and Noel Gallagher were both on hand to watch the Who gig the previous night, the Oasis' official denial of participation was correct after all (imagine that!). No Gallaghers in the supergroup, and no Starkey. The 'super' group that opened the show March 30th consisted of Paul Weller who did the first four songs solo (and stayed for the entire set), then was joined by James Dean Bradfield (Manic Street Preachers) and Kelly Jones (Stereophonics). Roger Daltrey came out, as did Steve Gorman (Stereophonics) for the last two songs - The Kids Are Alright and Magic Bus.

Around the end of March it was "leaked" (yeah, accidentally on purpose, just in time for the sale date - kV) that Oasis (on the 25th) and Paul McCartney (on the 26th) and Muse (on the 27th) would be headliners of this years Glastonbury Festival. The full lineup would not be announced until June 1. First, the promoter would not confirm anyone except Macca, and the Oasis official site would only say they were still in the "talking" stage. A week or so passes and rumors started floating that Oasis had backed out (due to recording, and or fighting, and or both), prompting the promoter to appear on the radio saying they are indeed headlining the Friday night. Throughout there had been rumblings that Zak would be drumming. Seemed possible as no WHO dates interfered directly.

FINALLY CONFIRMED - 07 May 2004: Although still not an 'official' announcement by the promoter, Noel Gallagher let it be known that they WILL be playing Glastonbury, and that Zak Starkey WILL be drumming for them at the gig, and that they've not talked with him about becoming their full time replacement [wagers anyone? - kV], but joked that "if he can get us his dad's autograph, he's in".

“He's a good boy he's got a good haircut. Good shoes - which is important."
“It's a pity that we haven't actually got any new stuff to play but I think we kind of George Best'ed it the last time we headlined it,” he explained, “So this time will be great I think. Then again we're not doing ourselves any favours because Zak's first gig will be to 150,000 people but y'know. He's rehearsing all the Oasis songs now." - as quoted at xfm's site and NME Online.
Here the BBC6 Radio interview that all the info comes from: BBC Music


14 June 2004 - Noel says that they will play two new songs from their unfinished album at Glastonbury, as the practice set timed out short without them! (BBC1/NME) 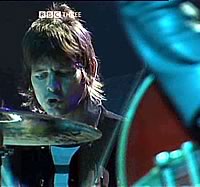 The rain stayed away for this day, and the band headlined the night on the Pyramid stage, again performing the two new songs debuted at Poole two nights earlier. This was the first time that the band have played at Glastonbury since they headlined in 1995, and was their biggest outdoor show since Manchester’s Old Trafford 2002.
Set List: Rock ‘N’ Roll Star, Bring It On Down, Supersonic, Morning Glory, Columbia, A Bell Will Ring, Stop Crying Your Heart Out, Little By Little, Cigarettes And Alcohol, Live Forever, The Meaning Of Soul, Acquiesce, Champagne Supernova, Songbird, Wonderwall, Don’t Look Back In Anger, My Generation Most of the set (new songs NOT included!) was broadcast by BBC, switching back and forth between BBC3 and BBC2. Rock N Roll Star thru Little Billy (minus the new one) was on BBC3. They switched to BBC2 for Cigarettes thru Champagne (minus the new one), back to BBC3 for Songbird and Wonderwall, and then back again to BBC2 for Don't Look Back In Anger and My Generation. 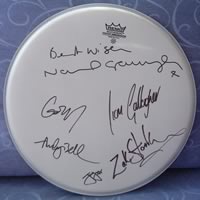 June 23, 2004 - Poole Lighthouse (21 Kingland Road), Poole, Dorset
Announced May 13th, Oasis, with Zak on drums, managed to squeeze in a warm-up gig prior to headlining at Glastonbury. The venue holds 2,500. Tickets went on sale May 15, were £30 and sold out immediately.

They played a 90 minute 'greatest hits' set with two new songs. Opening band was The Bees.
Set List: Fuckin’ In The Bushes, Rock & Roll Star, Bring It On Down, Supersonic, Morning Glory, Columbia, A Bell Will Ring (NEW), Stop Crying Your Heart Out, Little By Little, The Hindu Times, Cigarettes & Alcohol, Live Forever, The Meaning Of Soul (NEW), Acquiesce, Champagne Supernova, Songbird, Wonderwall, Don’t Look Back In Anger, My Generation. Early fan reports were positive and offered this tidbit:  "... Songbird was amazing. Just 2 acoustic guitars and that guy form kula shaker on the keyboards!" (Jay?)