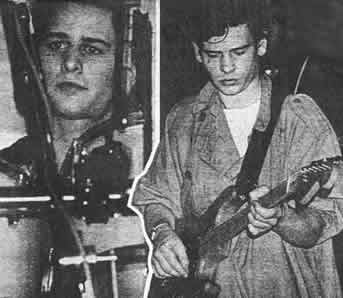 One 1987 June evening in a South London Pub, a six member band by the name of "Musty Jack Sponge and The Exploding Nudists" took the stage. On drums was Jason Starkey, and on rhythm guitar was his brother (also a drummer by trade), Zak Starkey.

The papers reported that their dad, also a famous drummer, blew off the party at Abbey Rd Studios marking the 20th Anniversary of "Sgt. Pepper's" release, in order to stand in a darkened corner of the pub to witness the two brothers' first public performance together.

Said Zak when asked about the possibility of the act continuing: "A band wouldn't want two drummers. And I would get sick of only playing the guitar."

Thanks to DW who was rummaging through her scrapbook, we have this pic of the entire(?) band: 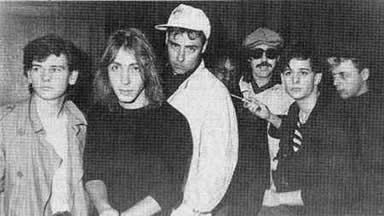 From this picture it is clear that none other than MICKY MOODY was there! Was he just schmoozing backstage or was he actually a Nudist for the night?? If you recognize any of the other Exploding Nudists, please tell us!
The tiny article that accompanied this photo says the gig took place at The Half Moon pub in Herne Hill, lasting about an hour and featured some oldies like "Rock N Roll Music" and "Roll Over Beethoven".

This was apparently a one-off gig, though at the time there was talk of more. Other "Nudists" that evening were various members of Buddy Curtis & The Grasshoppers (for whom Jason drummed), and included bassist "Gags", and lead singers "Floyd Dexter" and "Duke Dexter".