Zak Starkey has worked with Micky Moody on a number of projects over the years, dating as far back as their band Nightfly in 1985. Micky Moody (ex-Whitesnake) and Bernie Marsden (ex-Whitesnake and UFO) would often work together on each other's solo projects, and together they would appear as The Moody Marsden Band. In Dec of 1991, Zak Starkey was a member of the band when they recorded a great rockin' blues set, including some terrific old Whitesnake tunes. Would love to get my hands on tapes of COMPLETE shows from these gigs! It was originally released on CD in 1992, and is highly recommended.

The Moody Marsden Band has seen many personnel changes over the years. Micky and Bernie are now concentrating on their M3 (Classic Whitesnake) band.

Never Turn Our Back On The Blues 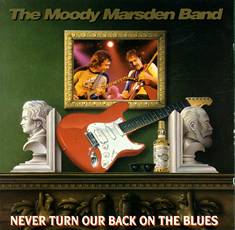 Inside are notes from a Kerrang! article about the album, dated August 1992.

The Time Is Right For Live

Bernie Marsden's Official Site has an online shop where BOTH of the above releases are available! ( Nov 2004)

Although the music on Never Turn ... was recorded live in December of 1991, it is unclear at this time how many shows were played by this line up, or their exact dates. If you know any details, PLEASE send them along!

According to Alan, formerly of the Red Hot Pokers, his band was the support band for Moody Marsden with Zak on drums and Neil Murray on bass, one nite (date unclear, circa '91 sounds right) at the Lido in Ainsdale near Southport. He remembers Zak, dressed in brown leather jacket, had a huge 4x12 speaker cabinet suspended very close to his ear as a monitor and it was horrendously loud! - THANKS Alan!

Over the years, Zak has continued to work with both Micky and Bernie - see their individual listings in the sitemap.