An article in the Daily Express (Mon. Dec 4, 1995) explains that Face had evolved through a number of lineups, and finally clicked when Zak joined up in September of '95. 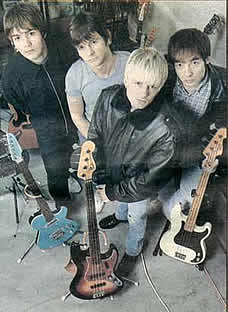 At the time of the article, the band was in the process of negotiating a deal with a major record label. Another little factoid from the article is that in November of that year, singer Danny Burton turned down the lead role in Pete Townshend's West End production of 'Tommy'.

Ironically, Pete was to coax another member away from the band in early 1996. Zak left Face to join up with the Who Quad Tour, following his appearance with The Who at The '96 Prince's Trust in Hyde Park.

Gary Nuttall is currently playing guitar in Robbie Williams' band, and recently joined Zak, John Entwistle and Rabbit for a short set of Rock Classics at the Tony Ashton Testimonial Concert. In fact, Gary had worked with Zak prior to Face, when they were both members of the band Spin Out circa 1989-1991.

Face did carry on for a while after Zak's departure. Danny Burton left Face in 1998 to form Grifter, who released an EP entitled "Garden". Once Grifter broke up, Danny was briefly in a dance crossover project called Hydroponics. Danny is now playing with a new band called "The Seers", who started gigging in the summer of 2001, and were still playing as of Jan 2002.

Talk about a sketchy bio!! That's about all I have found out about this band. IF YOU KNOW MORE, please let me know!

No official releases by this band in this configuration. In Dec of 1995, they were shopping for a label, and there MAY be demo material floating around of some sort. (If you have some, contact me! )
A series of demos were recorded with Zak on drums at John Entwistle's studios in Cotswalds, which is were Zak met and joined the band.

The band in this configuration with Zak did perform live. They played many sold-out gigs at places like the Underworld club in the World's End Pub, Camden Town.