Eikichi Yazawa is a major Rock Star in Japan. A 1996 Tokyo TV listing for a drama he starred in refers to him as "Rock Superstar". A pass through a search engine will turn up over 30 Album titles! He was a member of a rock band named The Carol, which broke up in 1975 prompting the start of his solo career. Most of the information on the web concerning Eikichi is all in Japanese, and unfortunately I don't read or speak the language. Please, any additional details welcomed!

For his 1992 album, Yazawa recorded a few tracks in London, and Zak Starkey was there on drums for at least two of them: 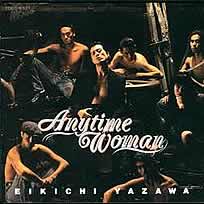 Best I can tell from the inside credits, the album was recorded in London and Los Angeles. It seems that at least tracks 1,2,5 and 7 were recorded in London, with Zak Starkey as the drummer for tracks 1 and 5 only. [tracks 4,8 have LA credits] 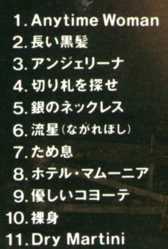 The Track Listing:
Only track 1 and 11 have titles printed in English - (forcing the use of this image rather than a text list!) Thanks to the kindness of Noriko, I have learned that track #5 is pronounced as 'Guin no Necklace', which means "Silver Necklace"!

**thank you to B-ko (Yumiko Shirai) for kindly taking the time to send CD Single scans and details!!
( b-ko UK)