Simon Townshend, Zak Starkey, Peter Gordeno and Phil Spalding joined forces after touring with Roger Daltrey in 1994, and became Animal Soup. They managed to record a number of demos for a possible LP, as well as play a few live gigs. 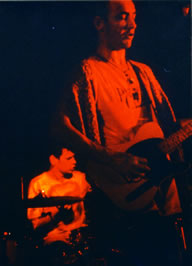 Fans of Simon's Among Us CD will recognize a few of the titles. However, the ANIMAL SOUP versions tend to be slightly harder and heavier than the later "stb" ones. (Especially "Girls On Girls"). The electric guitar part in "Ecstasy Heaven" credited to Zak on the CD, was apparently taken directly from this Animal Soup version. Zak also plays the slide guitar part on "When She Sleeps" (also from this demo session version). It is also quite possible that Zak is the second (or additional) guitar on a few more of these early versions. Zak DOES play the guitar solo in "Head, Hips And Heart". [Surprised he's playing guitar? Don't be, as he played most of the guitar on his own 1989 ICE:A2Z CD].

Simon has talked about possibly putting out a CD of these demos! Visit his official site and EMAIL him telling him you want to HEAR MORE 95 'SOUP!

|back to Zak on Simon Townshend releases |